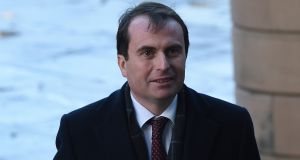 Former Fine Gael TD Seán Conlan: The judge remanded him on continuing bail to January 9th, when a date will be set for a sentencing hearing. Photograph: Philip Fitzpatrick

Former Fine Gael TD Seán Conlan has been found guilty of assaulting a customer with a broken glass last year in his family’s pub in Ballybay, Co Monaghan.

Following a full-day hearing in Monaghan District Court, Judge Conal Gibbons said it was clear that Conlan had consumed a considerable amount of alcohol and head-butted Enda Duffy, Annahia, Ballbay, and “used a glass to assault him thereafter”.

The assault occurred immediately after Mr Duffy had walked into Conlan’s bar on August 23rd, 2015. At the time Conlan was a sitting TD for Cavan-Monaghan. Judge Gibbons remanded Conlan on continuing bail to January 9th, when a date will be set for a sentencing hearing. Conlan, Main Street, Ballybay, who attended court alone and took notes, looked agitated after the verdict. He had pleaded not guilty to offences under section 11 of the Firearms and Offensive Weapons Act, and section 3 of the Non-Fatal Offences Against the Person Act. The trial heard from 16 witnesses, all for the prosecution.

Pub manager Peadar McNulty said he had taken a one-year lease on the pub just a month before the incident. He said Conlan had arrived alone at the bar at about 2.30pm and had watched a GAA match on the TV.

Michael Keenan said he and a number of friends went to the bar at about 8pm and Conlan was there. He said there was “craic and banter” with Conlan about potholes and Heather Humphreys, the Minister for the Arts and a Fine Gael TD for the constituency. Mr Duffy came into the bar and someone said: “There’s a Heather Humphreys man.” Conlan changed and became aggressive.

“He seems to have flipped,” Mr Keenan told Patrick Gageby SC, for Conlan.

Martina O’Neill said she went to the bar with her husband at about 9pm and spoke with Conlan, who had a pint glass in one hand and a brandy glass in the other. She said a group of young men were “singing a song about potholes and Heather Humphreys”.

A man she now knew to be Mr Duffy entered. Conlan said to him: “Who are you?” and “Who the f**k are you?” She turned on her seat just in time to see Conlan headbutt Mr Duffy twice on the nose. There was the sound of a glass breaking and her husband, Shane, quickly beckoned her behind him.

Mr Duffy said that when he came into the bar, his friend Mr Keenan asked him what he thought of Ms Humphreys. “I replied to him; ‘no good, no good’.” He said Conlan then approached him and “started to get aggressive”, repeatedly asking him who he was.

“At that stage I was afraid of Seán Conlan,” he told Fiona Murphy, who was instructed by the State Solicitor for Sligo Hugh Sheridan. “He was getting more and more angry when I wouldn’t speak to him.” He said Conlan pushed his face against the bridge of his nose twice. “I sort of side-stepped him. It was then that he smashed a pint glass off the edge of the bar counter.”

Mr Gageby asked Mr Duffy: “Did you say ‘what about the water charges, you Fine Gael c**t’ ?”

“You were the aggressor,” Mr Gageby said.

Garda John Maher of Ballybay Garda station said Conlan gave a prepared statement on September 1st in which he said Mr Duffy had come into the bar and was “giving out about Irish Water and water charges”.

Mr Duffy then head-butted him twice, Conlan said, causing his glass to break off the bar. “I fully refute any allegation that I assaulted Enda Duffy,” he told gardaí. The court heard both Mr Duffy and Conlan had been in contact with the Injuries Board in relation to claims against each other, with Conlan making the first contact.