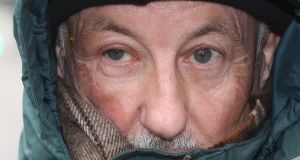 Oliver O’Grady: The Limerick-born pensioner had moved to the United States in the early 1970s after his ordination, and he had served as a priest in California. Photograph: Collins Courts

An ex-priest has been remanded in custody after appearing in court charged with possessing child pornography.

Oliver O’Grady (74) was brought before Dublin District Court on Saturday following his extradition from Portugal.

Mr O’Grady moved to the United States in the early 1970s after his ordination, and served as a priest in California. He left the US in 2001 and returned to Ireland.

He was arrested under a European Arrest Warrant (EAW) in the Algarve last month and held by authorities there before being sent back to Ireland. He arrived on Friday night at Dublin Airport and was arrested and taken to the Bridewell Garda station.

He is accused of possessing a video of a semi-naked underage girl engaging in a sex act contrary to section six of the Child Trafficking and Pornography Act.

It was allegedly in his possession on a date in 2015 at an address in Co Waterford. The offence can carry a sentence of up to five years.

Mr O’Grady, whose address was listed as Faro, in the Algarve, has not yet indicated how he will plead.

Det Garda Stephen Coller said Mr O’Grady was arrested on foot of the EAW at the airport and made no reply.

Det Garda Brian Morris, of Waterford station, told Judge Blake that he charged the accused at 11.03am at the courthouse and that Mr O’Grady “made no reply”.

Detective Garda Morris said the accused was also arrested on foot of a district court warrant issued in September. He sought a remand in custody.

Det Garda Morris said the Director of Public Prosecutions has directed prosecution on indictment, which means the trial will be dealt with at Circuit Court level. Solicitor Kate McGhee said her client was not making a bail application.

Judge Blake remanded Mr O’Grady in custody to appear at Waterford District Court on Tuesday for service of a book of evidence.

Legal aid was granted to Mr O’Grady after a statement of his means was furnished to the court and the judge noted there was no Garda objection.

Judge Blake also acceded to a request from the solicitor to direct medical attention for the accused in custody. Ms McGhee said her client was rather old and had a number of health problems including a heart condition.