Some cyclists seem to think ‘they are exempt from road traffic laws’, says judge in Ennis 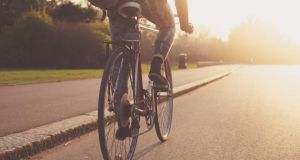 A cyclist was yesterday convicted of careless driving after a judge found he was travelling “at considerable speed” when he “rear-ended” a parked car with an elderly couple sitting in the front seat.

Before convicting Thomas Murphy (36), of Moyhill, Cratloe, Co Clare, Judge Patrick Durcan said, “Sometimes cyclists seem to have the view that they are exempt from road traffic laws.”

At Ennis District Court, the judge said it was clear Murphy was not looking where he was going when he hit the car on the Ennis-Limerick dual carriageway on December 31st, 2013. He said Murphy had an obligation to other users on the road and had “seriously breached that obligation”.