Court hearing suspended after man exposes himself to judge 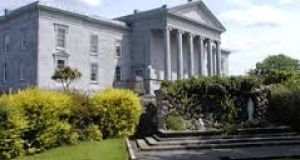 A court hearing was suspended after a man mooned a judge and then exposed his penis and shouted at the judge.

A district court hearing was suspended after a commotion was caused when a man exposed himself to a judge.

Proceedings at Ennis District Court were suspended after Brian Joyce took down his pants down in front of Judge Patrick Durcan.

Mr Joyce turned his back on the judge and slapping his exposed rear-end after Judge Durcan refused bail to the man’s younger brother, John.

John and Brian Joyce, both of St Enda’s, Beechpark, Ennis, were before the court on Section 3 assault charges of a 17-year-old man.

After mooning at the judge, Brian Joyce turned around, exposed his penis and shouted at the judge.

As gardaí in court restrained the 21-year old and his 18-year old brother, Judge Durcan retreated from his bench into his adjoining chambers.

One Garda was assaulted in the court during the melee. Around five gardaí were in court at the time and Garda reinforcements were called to deal with the disturbance. After court business was suspended for 20 minutes, Judge Durcan re-commenced the bail hearing.

Gardaí put handcuffs on both brothers and the court was cleared of family and friends who had been present for the earlier hearing.

At the resumed hearing, Judge Durcan remanded the two men in custody.

Insp Tom Kennedy was leading the Garda case in the bail application hearing yesterday and said that he was “horrified” by what he had witnessed in court.

Speaking after court, Insp Kennedy said: “What happened in court today was unbelievable. In all my time working in court, I never seen an indecent display like I witnessed today.

“What happened was incredible and to see someone moon at a judge and then show his genitals to the court and hold them in his hand was an affront to the administration of justice in the court.

“Why someone would do that, I just don’t know.”

Insp Kennedy said that he had witnessed a number of disturbances in court over the years, but never anything where such disrespect was shown to the justice system. He described the situation in court as “tense and explosive”.