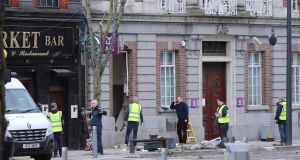 The scene at Clanbrassil street in Dundalk, Co Louth, where two ATM’s where stolen at the weekend. Photograph: Niall Carson/PA

Two south Armagh men were remanded in custody on Monday accused of involvement in a “highly sophisticated” double ATM theft.

Refusing bail to Fergal Nolan (24) from Bonds Road, Silverbridge and Michael Muckian (29) of Carrive Road, also Silverbridge, Judge Eamon King described the incident as having pre-planning akin to a “military operation,” adding that he shares police fears over the risk of further offences, interference with the investigation and the pair not turning up for court.

The defendants are jointly charged with four offences allegedly committed on April 4th, including two counts of possessing criminal property, handling a stolen VW Amarok pick up and handling property which had been stolen in the Republic of Ireland.

While Mr Nolan appeared at Craigavon Magistrates Court via videolink from Lurgan police station, Mr Muckian did not appear but the court heard he is displaying symptoms of Covid-19 and is currently being held in Musgrave Street police station.

Giving evidence, a PSNI detective constable said she believed she could connect each man to their respective charges while a prosecuting lawyer said their bail applications were objected to.

The lawyer told the court that a number of vehicles, including a van, a Mercedes and the pickup truck, were stolen from a house in Co Monaghan in a “creeper burglary” last Wednesday.

In the early hours of Saturday, two of those vehicles, the van and the Mercedes, were set on fire outside Dundalk Garda station in Co Louth and a stolen lorry was used to block the road while the pickup truck towed a low loader trailer to Main Street where the two ATMs were stolen.

She said a number of men were seen communicating on walkie talkies but gardaí arrived at the scene “within seconds” of the men leaving. They chased them using garda vehicles and a helicopter was also used to pursue them before they crossed the Border into the North.

The two defendants fled to Mr Muckian’s home in the Mullaghbawn area but were arrested after “armed officers forced entry.”

The lawyer revealed that while they have yet to be examined, it is estimated there was around €240,000 in the two cash machines, adding that when the pair were interviewed, they answered “no comment” to the large majority of police questions.

Turning to the objections to bail, the lawyer described the thefts as “highly sophisticated” which would clearly have involved a number of other people.

She submitted that if freed, Mr Muckian and Mr Nolan were likely to commit further offences in order to “recoup losses”, could abscond and could interfere with the investigation.

Defence counsel Michael Chambers, acting for both defendants, submitted there could be stringent bail conditions put in place in order to “allay police concerns.”

He argued they were unlikely to flee to the Republic as the charges they’re likely to face there “are more serious than the handling charges,” revealing that their respective parents were willing to lodge £10,000 each as sureties.

Refusing to release them on bail however, Judge King said the offences “seems to be like a military operation” with stolen vehicles used to obstruct gardaí­ followed by a “hot pursuit across the Border.”

He said he was refusing bail on all three grounds and remanding both men into custody, ordered them to appear again via videolink on April 29th.