Judge tells Olympic boxer he is blighting his reputation 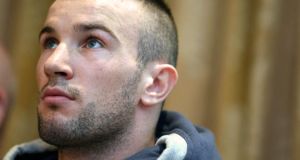 A drunken John Joe Nevin challenged a garda in a melee outside a pub by asking “do you know who I am?”, a court has heard.

When the 25-year-old Olympic boxing silver medallist was advised by the garda to leave the area of an early-morning melee outside the pub he replied “you don’t fu**ing tell me what I do”, Judge Seamus Hughes was told.

Nevin, of St Anthony’s Cottages, Mullingar, appeared in at the District Court where he admitted a public order offence arising from his involvement in “a general melee” which spilled out of the Porter House public house on Dominick St at 1am on December 27th last.

The court heard that the pub has also been known locally as The Slaughter House, arising from a number of violent incidents there.

Inspector Jarlath Folan told the judge that up to 20 gardaí had to be deployed to deal with the situation.

Nevin was very agitated and had attempted to strike another individual in the face, Inspector Folan said.

The exchange with the garda had occurred when he was directed to leave the area of the melee. He eventually did so, but had returned within five minutes as other fights were taking place and other people were due before the courts in connection with the incident.

Defence solicitor, Patricia Cronin, replying to Judge Hughes, said her client could not remember who he had attempted to hit as he was quite intoxicated.

Addressed directly by the judge, Nevin replied that he had begun drinking at 4pm in the afternoon and had consumed 10-12 pints of Carling beer at a guess.

“It was Christmas time, everyone is entitled,” Nevin said.

He told Judge Hughes that he was now off drink and training for his next professional fight in Philadelphia in June.

The judge told Nevin he was a national and international figure and that people looked up to him. He had watched with great satisfaction a TV programme about him and described him as “a good Christian”. But he was blighting his reputation by occasional instances of bad behaviour.

“For your sake, stop the messing you’re doing,” he said.

He warned Nevin that, while he was not going to “criminalise” him on this occasion, he would not hold back in sending him to prison in future if the need arose.

Nevin has already been barred from every pub in Co Westmeath, pending the hearing of a separate court case involving a brawl outside the same pub last month.

That case, along with similar cases involving four other members of his extended family, was on Thursday adjourned to Mullingar District Court in July.