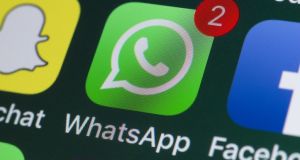 Omo Delpin Omorouyi was the innocent recipient of a video on WhatsApp which began innocuously and featured a man and a toddler. Photograph:iStock

A woman prosecuted for possession of child pornography after she failed to completely delete a two minute video sent to her on WhatsApp has received a suspended prison sentence.

Judge Pauline Codd said that in January 2018 Omo Delpin Omorouyi was the innocent recipient of a video which began innocuously and featured a man and a toddler.

Garnet Orange SC, defending, said his client did not know what the video was and began watching it. When it became apparent that it was “something sinister” she stopped playing the video.

She asked the sender, who she knew only by his first name, “why are you sending me child pornography?” and told him not to text her again.

She deleted the WhatsApp message but Garda Killian Leyden told the court the smart phone app automatically downloads images and videos to the phone once they are viewed so the video remained on the phone.

A month later gardaí carrying out an unrelated investigation went to search a house in Swords, north Dublin where the woman was living. The woman was not the target of this operation but her phone was seized from the house during the search.

A subsequent analysis recovered the video. Omorouyi was arrested and told gardaí­ she believed she had deleted the video.

“I did not know what it was until I opened it. I then deleted it from my phone,” she told gardaí. She said she regretted playing it.

Omorouyi (28) pleaded guilty to to possession of child pornography at her home in Swords on February 2nd 2018.

Mr Orange said that the case showed that “any of us could find ourselves the recipient of this kind of awful material.”

“This stuff is flying around online. It’s a case of there but for the grace of God go I,” he said.

He said his client should have reported the footage to gardaí­ but did not. Judge Codd noted that this is not a criminal offence.

She said the “disturbing” video showed the rape of a two-year-old child but that the woman had innocently received it. She suspended a prison term of four months, noting the lack of any other convictions.

At the end of the hearing John Byrne BL, for the DPP, asked Judge Codd to order the destruction of the mobile phone.

“It’s not possible to delete [whatever data is on it] with any degree of certainty,” he said.

Mr Orange told the court his client’s ambitions to work in childcare are now gone because this conviction means she cannot get Garda vetting.

“That door has being shut to her,” he said. She has left a college course in social care and is now working in a fast food restaurant.

He said she came to Ireland from Nigeria as a juvenile and that “appalling things” had happened to her in her past. In an assessment a psychiatrist said that “listening to her had a moving effect on him”.

Garda Killian Leyden said that the adult in the video has since been identified as a man in Michigan, US, and has been convicted.