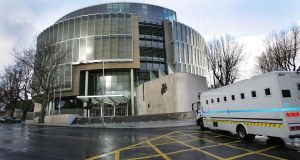 A woman has been jailed for staging her housemate’s suicide to impede the prosecution of her boyfriend for strangling her.

A woman has been sentenced to three years in prison for staging her housemate’s suicide in order to impede the prosecution of her then boyfriend for strangling her.

Egita Jaunmaize (34), a mother-of-one with no fixed abode, admitted placing a blue cord around the neck of Antra Ozolina (49) so as to simulate her suicide in order to make it more difficult to establish that her death was suspicious.

She pleaded not guilty at the Central Criminal Court to carrying out the offence, without reasonable excuse, at their home at The Old Post, Main Street, Kilnaleck, Co Cavan on or about June 27th, 2014.

Gardaí found the deceased in her bathroom with a blue rope around her neck. A bible and a vodka bottle were found nearby, and there were no immediate signs of a struggle.

Jaunmaize, a mushroom picker, told gardaí­ that she was in fear for her life and acting on her boyfriend’s orders at the time, having just seen him strangle Ms Ozolina with his arm. Both women were originally from Latvia.

The man, a neo-nazi, was never charged because his brain function is limited due to an injury sustained months later while fleeing after a car he hijacked crashed. He is currently in a care facility, where he is spoon fed.

After he was badly injured, Janumaize told gardaí that he had strangled Ms Ozolina and that he punched her when she tried to intervene. She said he had grabbed her by the throat when she threatened to go to gardaí.

The judge took into account the fact that the accused was “one of life’s victims” and in an abusive relationship with the killer at the time.

Mr Justice Patrick McCarthy noted that the authorities’ initial view was that the deceased had taken her own life, but that suspicion grew and tests were sought.

“She was a lady, who had appeared happy in herself, had family, and there was no indication that she had any suicidal ideation,” noted the judge.

The trial heard that a forensic autopsy showed that the deceased had sustained blunt force injuries, as well as the fatal asphyxia. The judge accepted that the accused woman’s involvement had arisen from her relationship with the assailant.

“There’s little doubt but that, on perusal of the psychiatrist’s and psychologist’s reports, her relationship with the assailant, the man who could undoubtedly be described as the murderer, was an abusive one,” he said, adding that the aggression had been extreme.

Mr Justice McCarthy said the accused might be described as a vulnerable person, noting evidence that this was due to her being the victim of a violent crime as a child.

“Notwithstanding the abusive nature of the relationship, the jury held her fully responsible for her actions,” he noted.

However, he pointed out that that sentencing was a subjective matter and he therefore had regard to the fact that she was suffering from post traumatic stress disorder. He also took into account her lack of a previous criminal record and the fact that she had worked hard in ireland, as well as “certain vulnerabilities of temperament and of personality”.

He said that the true suffering of the deceased woman’s family could be attributable only to the death itself and that the impeding offence could not be regarded as having a significant effect. He noted that the maximum penalty was 10 years in prison, but imposed a custodial sentence of three years, backdated to February 22nd last.