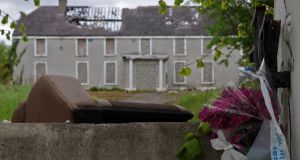 Glenwood House, Laraghcon, in Lucan. A witness at the Ana Kriégel murder trial said he saw a boy “making a beeline” for the house on the evening on which she was allegedly murdered. Photograph: Colin Keegan, Collins Dublin

A boy was seen walking towards the farmhouse where two teenagers are accused of murdering schoolgirl Ana Kriégel on the same day, a witness has told the Central Criminal Court.

The trial also heard from a local man who said one of the accused boys seemed to have been beaten up when he met him in a park after 5pm on the same day.

It is the prosecution case that Boy B lured Ms Kriégel from her home that day on the pretence of meeting his best friend, Boy A, who she was “interested” in. The prosecution further alleges Boy A then violently sexually assaulted and murdered her in a derelict farmhouse as Boy B watched.

Boy A has pleaded not guilty to the murder and sexual assault “involving serious violence” of Ms Kriégel on May 14th, 2018, at Glenwood House, Laraghcon, Clonee Road, Lucan in Dublin.

Boy B has pleaded not guilty to the murder of Ms Kriégel on the same date.

On Friday afternoon, Mr Justice Paul McDermott made an order restricting media reporting of the trial until after the verdict. At an evening sitting of the court he varied this order to apply to one specific media outlet only.

The court heard from a child witness, who had seen Ms Kriégel and Boy B walking together that day. The girl, who cannot be named because of her age, said they seemed like they were having a good time.

“They were laughing, talking, having a brisk walk,” she told prosecution counsel Brendan Grehan SC.

Under cross examination by Damien Colgan SC, defending Boy B, she agreed that Ana seemed happy as she was laughing along with Boy B. “Then they did a sort of a skip run, like the kind you’d do with your friends,” she said.

Witness Gerard Redmond told Mr Grehan he was walking his dog in a local park on May 14th. At about 5.08pm he saw a boy “making a beeline” through a field towards a disused farmhouse. He agreed with Mr Grehan this farmhouse was Glenwood House.

Mr Redmond said the boy looked tall for his age and was carrying a backpack. He said he assumed it was a schoolboy taking a shortcut home. It stood out to him because the field had just been planted and he thought the farmer would be annoyed if he spotted the boy.

Another witness who was walking his dog in the same park said that between 5.45pm and 6pm he met Boy A. He noticed the boy had a funny gait and looked like he had been hurt.

The man said he was worried the boy might have been bullied or attacked. He said the boy had what looked like blood on his shirt. “He looked in rough shape,” the witness said.

He asked Boy A what had happened and he responded that he had fallen “or something like that,” the witness said.

“He seemed embarrassed, like somebody had bullied him and he was embarrassed about it and he just wanted to go home,” the witness said.

The witness agreed with Patrick Gageby SC, defending Boy A, that there was no blood on Boy A’s face.

A friend of Boy A, giving evidence via video-link, said the accused called to his door at 5.55pm or 6pm. He said Boy A had a limp and was holding his chest.

Boy A said he had been jumped by two people in the park and had fought them off. The witness said he advised the boy to go home to his parents.

This witness said he was also friends with Boy B. He said he was with Boy B the Saturday after Ana was found and he asked him about the matter. Boy B seemed sad, he said. “I don’t really remember what we were talking about though, specifically,” the witness said.

The witness also said Boy B sometimes didn’t “trust” Boy A. “They were not the best of friends and sometimes [BOY B]wouldn’t trust [BOY A],” he said.