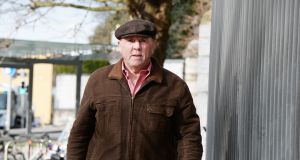 Co Louth republican Thomas ‘Slab’ Murphy has been sentenced to 18 months’ jail for the non-filing of tax returns.

The reputed former chief of the Provisional IRA was found guilty in December of the non-filing of tax returns relating to farming income.

Murphy will serve his sentence in the high security prison in Portlaoise alongside dissident republicans and gangland criminals.

In a statement released by his solicitors after the sentencing, Murphy said he had instructed his legal team to “pursue an appeal immediately”.

The 66-year-old, from Ballybinaby, Hackballscross, Co Louth, a farm that straddles the border with Northern Ireland, had denied nine charges of failing to comply with tax laws in the Irish Republic.

On December 17th, following a 32-day trial at the three-judge Special Criminal Court in Dublin, Murphy was convicted on all nine charges.

The prosecution alleged the farmer did not furnish authorities with a return of income, profits or gains or the sources of them over eight years from 1996 to 2004.

His evidence of black bags hidden in a hay shed containing more than a quarter of a million euro, and more than £100,000, as well as cheques, documents and laptops, clashed with defence counsel John Kearney QC’s description of a family farm and Murphy’s job as a “yardsman” for a company in Crossmaglen, for which he gets just over £1,000 a month before tax.

In his statement released after the sentencing, Murphy said:

“I am an Irish Republican and have been all my life.

For many years now I have been the subject of serial, prejudicial and wholly inaccurate commentary and media coverage.

“There have also been repeated assertions that I have amassed properties and wealth. This is utterly untrue. I do not own any property at all and I have no savings.

“Further with regard to my recent trial it was alleged by one broadcaster that 2 people who had given statements to An Garda felt unable to give evidence in court and there was a suggestion of intimidation of these witnesses.

“This is absolutely untrue. The witnesses did give evidence. The prosecutions legal team did not even allege there was witness intimidation.

“Despite never having been questioned by An Gárda Síochána in relation to Revenue matters I was arrested, charged and put on trial in the Special Criminal Court for failing to file tax returns in respect of farming.

“The case presented against me was that tax returns with an average liability of €4,279 tax per annum should have been filed by me over a 9 year period in relation to farming.

“The evidence called by the prosecution showed that Tax returns were made by family members in respect of the farm, and that all tax on any profit from farming has been paid.

“I maintain my innocence in respect of these charges which date back 20 years.

“Naturally I am very disappointed at the verdict of the court and have instructed my legal team to pursue an appeal immediately.”