Teenager sentenced to 11 years for attempted murder at Dún Laoghaire 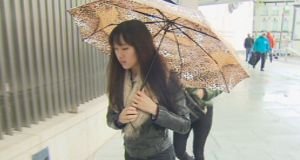 A screengrab of Stephanie Ng leaving the Central Criminal Court in Dublin after a 17 year old boy was sentenced to 11 years for her attempted murder in Dún Laoghaire in December 2017. Photograph: RTÉ News

A teenage boy who attempted to murder a woman at Dún Laoghaire during a pre-planned attack has been sentenced to 11 years.

The sentence will be reviewed in 2023 when the boy will have served a total of five years in prison, Mr Justice Michael White said. A judge may then suspend some or all of the balance if they feel it is appropriate.

The boy (17), who cannot be named due to his age, pleaded guilty to the attempted murder of Stephanie Ng on December 23rd, 2017, at Sea Front, Queen’s Road, Dún Laoghaire.

The boy, who was 15 at the time, met the woman on the Whisper social media app. He had previously indicated that he wanted to kill or harm someone.

He tried to kill Ms Ng, who was then aged 25, during their first face-to-face meeting two days before Christmas, after suggesting they take a selfie by the water’s edge. He grabbed her from behind and choked her to unconsciousness before slashing her neck with a knife.

When she came around, she was lying on the ground near the water’s edge, her hand was bleeding and there was blood around her head. Her clothes had been cut. Ms Ng was taken to hospital and treated for a 10cm neck laceration, which cut most of the way through her trachea.

In October, the boy’s mother told Mr Justice Michael White in the Central Criminal Court that she felt something terrible was going to happen in the period before the attack due to the boy’s mental state.

She said she and her husband had slept with their son in the living room in order to monitor him. She also said the administration of increasingly high doses of Prozac anti-depressants to him may explain his actions. A court appointed psychiatrist previously said it was not clear if the drug had any influence on the boy’s offending behaviour.

The court heard the boy poses an ongoing, potentially fatal, risk to others.

Mr Justice White called it a “cold, calculated attack” which was pre-planned and premeditated.

He noted that the boy had contacted Ms Ng on social media for the purposes of harming her. The boy inflicted the two most serious wounds on her after she lost consciousness and then left her to die, Mr Justice White said. “He made no attempt to seek assistance.”

The boy’s age and mental illness were “inextricably bound up in the offence,” the judge said, adding it was clear he was suffering from significant mental illness in the lead up to the attack.

He said the court must take into account the boy’s youth, mental state, lack of previous convictions and the fact he comes from a loving family.

He said the sentencing presented a challenge to the court due to the legislation contained in the Children Act which states partly suspended sentence cannot be imposed on a minor.

Mr Justice White said he would have imposed a partly suspended sentence combined with intensive monitoring in the community if the option had been open to him. The judge said the offence was at the upper level of seriousness and that the “headline” sentence was life imprisonment.

After taking into account the mitigating factors, he imposed an eleven year term to date from when the boy went into custody two years ago. This sentence will be reviewed in 2023, he said.

The judge said the sentencing process has also been hampered by the absence of evidence from the boy’s treating psychiatrist due the refusal of the accused’s family to make it available to the court. This was their right, he added.

When the sentence is reviewed in 2023 it will be open to a judge to suspend the remainder, Mr Justice White said. He said he will have retired by that stage meaning another judge will be dealing with the case.

Ms Ng was in court for the sentencing hearing with her family. She previously said in an emotional Victim Impact Statement how the attack had “destroyed my life.”

She detailed the slash wound across her neck, which went 75 per cent of the way through her windpipe, damaged her voice box and left scarring. Tendons in her hand were also severed while she was unconscious.

She began to cry when asked to read about the psychological effects the crime had on her. She said that she was now a different person, who struggled to trust others and was afraid of teenage boys.

“I have sought professional help but how do you talk to someone who has no experience of being that close to death?” she asked.

“The scars you inflicted on my neck and hand will forever be a reminder of your demonic actions,” she said.

She noted the number of times that he had tried to ‘lure’ her to isolated locations that day ‘in order to fulfil your urges’.

“Your persistence down at the water’s edge showed how determined you were to have me dead,” she said.

She said that, although she felt lucky to be alive, she was not prepared for the flashbacks.

“Going to the sea triggered it all again, your rough arms around me trying to take my life,” she said. “Why did you cut my throat and thumb when I was out cold and unconscious? You have taken my life and happiness and everything that goes with it.”

She said that her injuries would remind her of her attacker for the rest of her days. However, she was looking forward to the day she would be free of the tortures of her mind and past.

“All I can do is trust and believe, because the thought of this lasting for the rest of my life is intolerable,” she concluded.

Det Garda Daniel Treacy told Paul Burns SC, prosecuting, that the accused met his victim on the Whisper social media app. He was 15 at the time, and his victim was 25. However, he told her he was 19. They exchanged ordinary photographs to confirm they were real people.

He disclosed his name and certain family details and that he was attending psychiatrists for therapy, due to him having depression, suicidal and intrusive thoughts.

He told her that he could not commit to girls.

“It’s like being a psychopath. You just don’t feel it,” he wrote, saying he was “feeling it for the first time”.

They arranged to meet in Dún Laoghaire on December 23rd, with him saying he would bring her to a secret spot. She jokingly said it sounded like he was going to murder her. He replied that he did not think he could murder her.

They met at the entrance to Dún Laoghaire Shopping Centre shortly after noon and walked to York Road, where the accused asked her to go into a vacant house. She declined. He suggested another abandoned house and she again said no. They then walked to the promenade and he suggested going into the old disused baths. She declined.

“At his request, they went down to the water’s edge to take a selfie,” Det Garda Treacy told the court.

“She was facing out to sea when he grabbed her from behind in a neck lock. He then moved in front of her and started choking her with his right hand while brandishing a knife in his left hand.”

Ms Ng raised her hand to defend herself and suffered significant lacerations as a result. He told her to stop screaming in a calm and controlled voice.

She passed out due to the stranglehold. When she came around, she was lying on the ground near the water’s edge, her hand was bleeding and there was blood around her head. Her clothes had been cut.

She managed to get to her feet and take a few steps but collapsed. Walkers noticed her and came to her assistance.

Ms Ng was taken to to St Vincent’s Hospital, where she was found to have a 10cm-deep midline neck laceration, which penetrated her trachea.

She also had wounds to her right arm and thumb, consistent with defensive stab injuries. She had a fast heart rate and low blood pressure, consistent with significant blood loss. She had other symptoms that showed she probably had blood in her lungs.

She had to be put into a medically-induced coma and underwent emergency surgery.

Although she was unable to speak that day, she managed to speak with assistance the following day. She showed gardaí the communications she had with the accused and indicated that the person in the photos was her attacker.

Through examination of her phone, found in her handbag at the scene, gardaí were able to identify the attacker as the accused. They searched his home the following day.

When they entered his bedroom, he stated: “This is about the stabbing of that girl in Dún Laoghaire. I haven’t got the knife. I threw it in the ocean.”

Gardaí seized a Leinster rugby backpack and a coat, both with suspected blood staining on them. They also seized a book of drawings, produced to the witness in court.

It contained various writings and sketches, including an entry from December 17th, showing someone being cut up with a knife. There was also a written entry on a date in November 2017, where there was reference to a therapist, along with the words, ‘serial killer might also be self deprecator might also be self praiser’.

He was arrested and taken to Dún Laoghaire Garda station, where he exercised his right to silence throughout five interviews.