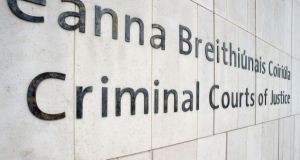 Celyn Eadon’s sentence was backdated to when he first went into custody in March 2011. Photograph: Dave Meehan/The Irish Times

A son who killed his mother in a drug-fuelled “frenzied knife attack” a decade ago and whose murder conviction was subsequently overturned by the Supreme Court remains a public risk and will need to be supervised when he is released into the community, a High Court judge has ordered.

Imposing a 14-year jail term at the Central Criminal Court on Monday on a charge of manslaughter, Mr Justice Michael White said Celyn Eadon “remains at risk of inflicting violence on the public” and his violent temperament is an “alarming factor”.

The court heard that he has eight previous convictions for assaults on prison staff, which occurred subsequent to his mother’s killing.

Eadon’s sentence was backdated to when he first went into custody in March 2011 and Mr Justice White said it was essential that the defendant be supervised and placed in high support accommodation upon his release from prison.

The judge said that the now 29-year-old had inflicted multiple stab wounds to his mother’s head and body and killed her in a “frenzied attack”, which was caused by chronic substance abuse after ingesting a “cocktail” of illegal substances.

The court heard during Eadon’s sentence hearing earlier this month that he was in danger of becoming homeless once he is released from custody and the probation services were not in a position to offer him suitable accommodation.

Defence counsel Patrick Gageby SC had submitted that it was “utterly apparent” that Eadon had acquired a brain injury from his consumption of drugs as a juvenile and it was unfortunate that this matter was “not more readily publicised”. He said that “gross intoxication” was not an excuse for his client’s actions but it had deprived him of an intention to kill and cause serious injury to his mother.

Last November, the State accepted Eadon’s plea to the lesser offence of manslaughter, on the basis that intoxication can prevent the formation of the statutory intent needed for murder.

Eadon, who appeared today via video-link from prison, was aged 19 when he killed his 46-year-old mother in the early hours of March 9th 2011. He stabbed Noreen Kelly 19 times in their home at Derrycrieve, Islandeady, Castlebar, Co Mayo.

He had admitted to her killing that day and pleaded guilty to her manslaughter. However, a jury found him guilty of her murder by unanimous verdict, and he was sentenced to the mandatory term of life imprisonment in February 2014.

The defendant had his conviction for murder overturned in December 2019, when a five-judge Supreme Court ruled that it was unsafe. The superior court found that the trial judge’s instruction to the jury on intoxication and specific intention was inadequate, as it had not informed the jury of the “vitally important point” that intoxication can be a partial defence to murder but not to manslaughter.

The Director of Public Prosecutions (DPP) had to decide whether to accept Eadon’s manslaughter plea or pursue a retrial on the murder charge. However, the Central Criminal Court was told last October that the DPP was accepting the plea to manslaughter on the basis of intoxication.

The Supreme Court noted in its judgement that since Eadon was aged 13, he was a significant and persistent abuser of alcohol and drugs, including amphetamines, cocaine and crystal meth. In the 18 months before the killing, he was spending upwards of €400 per week on drugs and drank large quantities of alcohol on a daily basis.

At the sentence hearing, Seamus Clarke SC on behalf of the DPP read out a victim impact statement prepared by Mark Eadon, the deceased’s former husband and Eadon’s father.

He said that his wife had lost her life trying to protect her child.

“I do not blame Celyn for what happened anymore,” he said. “I’m sure, had she survived, she would have forgiven him.”

He said that young people now were under great pressures, adding: “The international drugs trade has almost every nation in its grip.”

Eadon was on Monday sentenced to 16 years in prison with the final two years suspended on the condition he adhere to the strict conditions set by Mr Justice White. The sentence was backdated to March 11th 2011.

The judge outlined a number of conditions for the suspended part of the sentence, including that Eadon reside at an address agreed with the probation officer, attend all appointments with the probation service and cooperate fully with the HSE and service providers with mental health needs.

Mr Justice White stressed that there was “an urgent need” that Eadon be released in a structured manner and be supervised in the community. “It is essential that high support accommodation needs to be given in a structured release. The only practical way to deal with him is through the mental health service due to his substance induced brain injury,” he added.