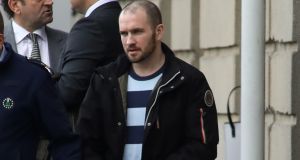 A serial sex offender who attacked three women in the space of 11 days after meeting them through Tinder has been jailed for 12 years.

Patrick Nevin (37) attacked the women during their first meeting after they had been texting each other on the Tinder dating app and over the mobile phone.

A Probation Service report noted that Nevin had a preoccupation with sex and used sex as an emotional coping mechanism. It also stated he had an hostility towards women and placed him at a high risk of re-offending.

Last June, Nevin pleaded guilty to raping one woman at Bellewstown, Co Meath on July 12th, 2014 and to sexual assault four days later of a second woman at an unknown place in Co Meath.

The father-of-two had been due to stand trial but changed his pleas to guilty following a legal ruling, which would allow the prosecution to introduce evidence from the other women describing sexual assault by Nevin on a first date.

His lawyers had challenged the admissibility of this “conduct evidence” but Ms Justice Eileen Creedon ruled in favour of the State. Last November she adjourned sentencing to allow time for a Probation Service assessment to be carried out.

The computer programmer is already serving a five and a half year sentence for the sexual assault of a Brazilian woman he met on Tinder. This offence took place at the UCD campus on July 23rd, 2014, only weeks after the victim arrived in Dublin. His lawyers told the court on Monday an appeal against this conviction has being withdrawn.

Nevin used the same “modus operandi” in all three attacks. He would convince the women to meet with him for a drive and pick them up at their home in a blue BMW. The court heard the women believed Nevin would kill them during the attack and were fearful afterwards because he knew where they lived.

The first victim said she had agreed to meet him after telling him she did not want to meet for sex or a “one night stand”.

Nevin picked her up at her home and drove for about 20 minutes to a remote back road in Meath. He parked up beside a graveyard and told the woman he knew the area and was known in Dundalk “and not in a good way”.

After some consensual sex took place, the woman made it clear she did not want to do anything else but Nevin then raped her, despite her asking him to stop.

Reading from her victim impact statement, the woman told the court the rape changed her life and had affected her relationship with her young son.

“To say I was terrified is an understatement. After he raped me I was convinced he was going to leave me for dead in that area, beside an old graveyard.”

Five days later Nevin picked up the second victim at her home. They had met online on July 2nd. He drove her to a country lane.

After some kissing Nevin moved on top of her but the victim said she did not want this. Nevin became angry and told her she could get out and walk home.

He put her out of the car on a dark country road late at night and drove on a bit.

He came back and told her to get back in and his mood seemed calmer. Once back in the car, he pinned her down and began to sexually assault her.

He continued his attack even after the woman suffered a panic attack and only stopped after ejaculating. He then told her he had recorded it on his phone, which the court heard left the woman feeling embarrassed and worried about where the recording might end up.

On Monday, Ms Justice Creedon said the two attacks were premeditated and callous. She said Nevin had behaved in a predatory fashion, choosing his victims at random from the dating app.

He then carried out the attacks with cold pursuit and a remorseless attitude. In the second attack he tricked the victim back into the car after initially telling her to get out when she refused sex.

She set a headline sentence of 15 years. She noted that he has since written letters of apology to both victims. A forensic psychiatric report was sought by his lawyers but was never provided to the court.

The judge reduced the sentence by one year to 14 years to take into considerations the guilty pleas and apology. She suspended the final two years and ordered him to be subject for five years post release supervision.

As part of this supervision she ordered that he abstain from physical performance and body building substances and refrain from using the Internet or dating sites to contact people.

The judge also ordered him to engage in offence focused programmes and to address his low tolerance threshold and anger management. Finally she ordered that he must notify the Probation Service if he plans to leave the country.

The sentence was backdated to June 2015. Nevin has being in custody since September 2014 when he was first arrested for the UCD campus attack.

Lawyers for Nevin had asked the court to consider in mitigation his guilty plea and said this plea was of comfort to the victims. Paddy McGrath SC, defending, said his client’s plea was an expression of his remorse.

Mr McGrath also said Nevin had written letters of apology to the victims. He said that his client was a relatively young man and asked the court to leave him some light at end of the tunnel.