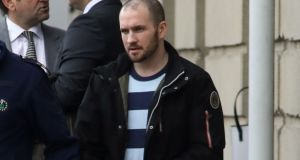 Serial sex offender Patrick Nevin has been jailed for 5½ years for attacking a Brazilian student he met on Tinder.

Nevin (37) was convicted after a trial last December of sexually assaulting the student when they met for a first date, after “matching” on the Tinder dating app in July 2014.

Nevin has since pleaded guilty to raping another woman and sexually assaulting a third victim. All three attacks took place within 11 days in July 2014 and all involved Nevin meeting the women on Tinder and then picking them up at their homes in his dark blue BMW.

Nevin, with former addresses of Mounttown, Dún Laoghaire, Dublin and Castlebellingham, Co Louth, then drove the women to secluded locations and attacked them.

After a trial at Dublin Circuit Criminal Court in late 2017, a jury found him guilty of sexually assaulting the Brazilian woman on UCD campus, south Dublin on July 23rd, 2014. His lawyers told the court Nevin continues to deny the charge.

Judge Cormac Quinn said “contact on Tinder did not give consent to sexual assault”. He said Nevin brought the victim to a secluded spot knowing she was a foreigner who did not know where she was and spoke very little English.

He also noted the use of force during the attack with Nevin punching the woman in the head. He said she is petite while he is a well-built man.

Judge Quinn said he had to take into consideration mitigating factors such as Nevin’s age and a prison governor’s report, which stated Nevin is on an enhanced privilege level and is pursuing studies in custody. He previously acquired a degree in software engineering from UCD while serving a prison sentence for a serious assault.

Judge Quinn sentenced Nevin to a prison term of 5½ years. He also imposed a post-release supervision period of two years, with a condition that Nevin is not to use the internet to make contact with anyone unknown to him for the purposes of meeting with him.

The sentence is backdated to September 2014 when Nevin was arrested. He has been in custody since awaiting trial.

The court heard the victim was a language student using Tinder to meet Irish people to practise speaking English. After the two “matched” , Nevin repeatedly asked the woman to meet. She agreed, believing they were going for a coffee.

Instead Nevin drove her to a secluded field on UCD campus. When she resisted a forcible attempt to kiss her, Nevin became aggressive and began cursing.

He put his hand up her dress and she struggled with him. He pulled down part of her dress exposing her breast and restrained her by holding her arm.

During the struggle Nevin punched her on the back of her head. The attack stopped when she managed to release her seatbelt and get out of the car and Nevin drove off.

He left her in a distressed state and she didn’t know where she was. A lady out walking her dogs came to her assistance and helped her get a taxi.

The woman testified that she was in fear of her life and thought Nevin was going to rape her. The victim, now aged 36, told the court on Friday that it had been very hard for her to travel back here for the trial and to see her attacker.

She felt “the same fear I felt that day when he became a monster in front of me”.

The woman said when the jury returned its verdict, she felt a freedom she had not felt for a long time.

Reading from her victim impact statement, in halting English, she said: “Initially I blamed myself for everything that happened. I’m afraid of people’s judgment about how I am especially when it comes to men.”

The woman said she struggles to still believe that men can be kind.

Investigating garda Det Sgt Denis Ellard told the court Nevin’s eight previous convictions include one for “a brutal assault” on his then partner. In that 2001 attack, Nevin killed the woman’s two dogs before an assault on her which left her with serious injuries. He received a seven-year prison term for this.

Patrick McGrath SC, defending, told the court that his client does not accept the verdict of the jury for the sex assault offence. Nevin is due to be sentenced in another court next month for the rape offence and the other assault.