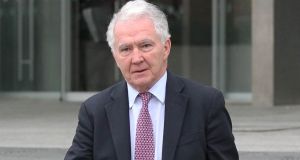 Former chairman of Anglo Irish Bank Seán FitzPatrick who is accused of misleading Anglo’s auditors between 2002 and 2007. Photograph: Collins Courts

The trial of former Anglo Irish Bank chairman Seán FitzPatrick has become the longest running criminal trial in the history of the State. On Tuesday, it entered its 90th day at Dublin Circuit Criminal Court.

It is the prosecution’s case that multi-million euro loans taken out by Mr FitzPatrick (68) and his family were “artificially reduced” for two weeks around the bank’s financial end-of-year statement by short-term loans from other sources, including Irish Nationwide Building Society (INBS).

The jury has been told the case concerns the alleged failure by the bank’s former chairman to disclose the extent of these loans to auditors from 2002 to 2007. Mr FitzPatrick has denied all charges.

The trial began last September and was due to end by Christmas but was delayed by weeks of legal argument over certain issues.

Last week Judge John Aylmer told the jurors that they should not be embarrassed if they felt tired and needed a break. He told them that the evidence during the trial was at times “tedious”.

Set to run into April

Mr FitzPatrick of Whitshed Road, Greystones, Co Wicklow has pleaded not guilty to 27 offences under the 1990 Companies Act. These include 22 charges of making a misleading, false or deceptive statement to auditors and five charges of furnishing false information in the years 2002 to 2007. The trial continues.

On Tuesday, Bernard Condon SC, defending, finished his cross-examination of Vincent Bergin, a partner with audit firm EY (previously Ernst & Young) who led the audit of Anglo for the years 2005 to 2008.

Mr Condon has told the jury that the statement of Mr Bergin was produced by a process of coaching and “cross-contamination” using processes ruled by the court as “unlawful”.

Judge Aylmer told the jury that a legal issue had arisen and that it would take nearly two weeks to deal with. He asked the jury to return to court on March 13th to continue hearing evidence.

He also told them that it was no longer the case that the trial would finish by the end of March, as the jury had been previously told. He said it is estimated the trial will run into April.

The jury forewoman told the judge that members of the jury had commitments and holidays booked from April 3rd to April 24th.