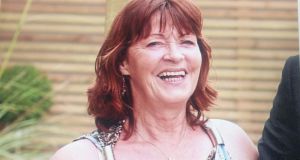 Evidence has been given that the body of Mrs O’Connor was dismembered into 15 separate parts that were found at nine different locations over 30 kms in the Dublin and Wicklow mountains.

A murder accused told gardaí he “took the rap” for killing and dismembering his partner’s mother, Patricia O’Connor, but felt he was being set-up, as his girlfriend Louise O’Connor subsequently started going out with her ex again, the Central Criminal Court has heard.

Father-of-three Kieran Greene also told interviewing detectives that, after he was attacked by Patricia O’Connor with a hurley, her husband Augustine ‘Gus’ O’Connor hit her twice with a crowbar and then told him: “I’m defending you so you can take the rap for this.”

The Central Criminal Court has heard that the body of Mrs O’Connor was dismembered into 15 parts that were found at nine locations in the Dublin and Wicklow mountains between June 10th and 14th, 2017.

On Thursday the court heard the accused man say that Louise O’Connor’s ex-partner Keith Johnston “made a plan” and cut up Mrs O’Connor’s body parts beside a shallow grave in Wexford before directing him up the Wicklow mountains.

Mr Greene claimed Louise O’Connor had told him “to get rid” of her mother’s body and had cleaned the floor of the bathroom where the attack took place.

Mr Greene also maintained that his step-daughter Stephanie O’Connor pretended to dress up as her retired grandmother to make it look like Mrs O’Connor had gone missing.

The jury was on Thursday listening to a garda interview conducted with Mr Greene on December 9th, 2017, six months after he told detectives that he had dismembered the body of Patricia O’Connor on his own.

The deceased’s daughter Louise O’Connor (41) and granddaughter Stephanie O’Connor (22), both of Millmount Court, Dundrum Road, Dublin 14, and Louise O’Connor’s ex-partner Mr Johnston (43), of Avonbeg Gardens, Tallaght, Dublin 24, are all charged with impeding the apprehension or prosecution of Mr Greene, knowing or believing him to have committed an arrestable offence, to wit the murder of Mrs O’Connor on May 29th, 2017.

The jury has heard that Mr Greene walked into Rathfarnham Garda Station on June 12th, 2017 and told a detective that he had done “something terrible” and had scattered the body parts of the grandmother in the Dublin mountains.

Following this, Mr Greene gave four voluntary statements to gardaí on June 12th and 13th, 2017 in which he described chopping up the body of his partner’s mother beside a shallow grave “to make her lighter”, before he packed the parts into black bags and threw them “all over the place up there”.

Mr Greene was arrested for the murder of Patricia O’Connor on the evening of June 13th, after he brought gardaí to the shallow grave in Wexford, where he said he had buried the deceased before returning some days later and cutting up her body.

Detective Sergeant Brian Hanley, attached to the Garda National Bureau of Criminal Investigation, told prosecution counsel Róisín Lacey SC on Thursday that a request was made by Mr Greene to speak to members of the senior investigating team.

Det Sgt Hanley said Mr Greene told him he wanted to discuss the case and explained that he had been attacked by Patricia O’Connor with a hurley in the bathroom of Mountainview.

Mr Greene said he was trying to get the hurley off his partner’s mother and asked her why she had done this. Patricia O’Connor told him that it was her house and she could do what she wanted, said Mr Greene. They were struggling with the hurley and Mr Greene said he hit her twice before she grabbed it again and winded him in the stomach. He said he went on the ground before he heard someone coming down the stairs.

The accused said at this point Mr O’Connor told him: “I’m defending you so you can take the rap for this.” Mr Greene said they both panicked, did not know what to do and he took Patricia O’Connor’s body to her bedroom. His partner Louise O’Connor came downstairs after hearing the voices and told them to “get rid” of her mother’s body, so he put her remains in the boot of a car.

Mr Greene said he drove to a place in Wexford, took Patricia O’Connor’s remains out of the car, dug a hole and buried her on farmland.

Afterwards, Mr Greene said he drove back to Mountainview and Louise O’Connor was cleaning the floor of the bathroom, where the blood was. “I told her she was buried,” he said.

“He [Mr Johnston] took bags from the back of the car and emptied it, he continued doing this until all the bags were gone,” said Mr Greene, adding that Mr Johnston would say “stop” as they drove. They changed their clothes on the way back, he said.

Mr Johnston dumped the tools in Dodder Valley Park and burnt the clothes they had been wearing, said Mr Greene. He said Mr Johnston came to Mountainview the next day and scraped the tiles and painted the walls of the bathroom.

Mr Greene said he was persuaded “into taking the blame for all this” and said he would.

In relation to Stephanie O’Connor, Mr Greene said she pretended to dress up as her grandmother to make it look like Mrs O’Connor had gone missing and had left the house that night carrying a suitcase.

“We all agreed I’d take the blame; why I don’t know. I feel I shouldn’t be taking the blame. I feel I was set up because my Mrs and Keith are going back out,” he said.

“I’m facing a murder charge and they are out there and I’m taking the rap for it. The only reason I didn’t say anything sooner was because I was afraid for the kids.”

He again insisted to gardaí that Mr O’Connor had hit his wife over the head twice and demonstrated the action. Mr Greene said he did not know what happened to the crowbar, which he described as being around a foot-and-a-half in length. “I don’t know if it was a crowbar with a curl at the end, I just saw the bar part of it,” he continued.

Mr Greene said Louise O’Connor had rang Mr Johnston on the phone to tell him what happened.

The accused man said he was getting sick as Mr Johnston cut Patricia O’Connor’s body up. “I helped him with the parts he put into the bags into the car,” he said, adding that they had been in the field for between three and four hours.

Mr Greene said he did not understand why Stephanie O’Connor had dressed up as her grandmother and he thought Patricia O’Connor’s remains were in the boot at the time.

“I was persuaded to do all of this,” he said, adding that he was concerned for his children if he and Louise O’Connor had been arrested. “Now, I know they will go up to my ma,” he said.

The accused said Mr O’Connor had killed Patricia O’Connor between midnight and 1am, when everyone was in bed. “I honestly didn’t do it. I swear on anyone’s life I didn’t do it, you have to believe me,” he concluded.

At this point, Mr Justice Paul McDermott warned the jury that anything said by Mr Greene in the trial is only evidence against him. “It is not to be used and cannot be used as evidence against any of the co-accused as a matter of law,” he emphasised, adding that it was very important they understood this.

Sergeant Nuala Burke told Ms Lacey that she took a voluntary statement from Stephanie O’Connor on June 13th, 2017. Stephanie O’Connor said she always held Mr Greene in high regard for being a great dad to his three kids. She said Patricia O’Connor and Mr O’Connor had never lived as husband and wife.

Her grandmother had retired the year before and did not leave the house, she said, adding that she rarely went outside. “When she had good days she was great, when bad times she was terrible,” she said. Patricia O’Connor “sucked the life out” of her mother Louise O’Connor and made life very difficult, she said, adding that her grandmother hung over them the fact she could throw them out of the house at anytime. She said she liked to make people unhappy.

She said she started to suspect Mr Greene had done something to her grandmother. She said Mr Greene told them “nana” had hit him with a hurley and before he knew it she was dead on the floor. He said he brought the body to Wexford and Stephanie O’Connor said she did not want to know any other details.

Garda David Sheahan gave evidence of taking a child’s hurley from Mountainview on June 13th, which was up against a fireguard. The witness took a voluntary statement from Mr Johnston on June 14th, 2017. Mr Johnston said he started going out with Louise O’Connor in 1995 and she got pregnant with Stephanie O’Connor in 1997. He said he moved into the house at Mountainview for over a year in 2006. He said Patricia O’Connor would pick on Mr O’Connor more than anyone else and described him as a placid man.

Mr Johnston said he did not get on with Mr Greene initially when he started going out with Louise O’Connor but they later became friendly. He said he was aware of a “big blow up” in Mountainview on May 29th and had fixed a step and tiles in the bathroom of the house but did not get Mr Greene to help as he was “useless”.

“I kind of thought when doing that, that I could be potentially cleaning up a crime scene. There was a nagging thought in the back of my head but I thought nothing of it,” Mr Johnston commented.

He said Mr Greene had been “extra quiet” and there was tension in the house. “It became fairly apparent he killed Trish”, he said, and when Louise O’Connor found out she was almost sick in front of him. “I’ve never seen Patricia hit anyone, it was always her mouth,” he concluded.

Mr Johnston has pleaded not guilty to assisting Mr Greene in the purchase of various implements at Woodie’s, Mr Price, B&Q and Shoe Zone, Tallaght, Dublin 24 on June 9th, 2017, which were to be used in the concealment of the remains of Patricia O’Connor.

Mr Johnston also denies engaging in the refurbishment of a bathroom at Mountainview Park, Rathfarnham, Dublin 14 between May 31st, 2017 and June 9th, 2017, in order to destroy or conceal any evidence relating to the murder of Patricia O’Connor.

Stephanie O’Connor has pleaded not guilty to disguising herself as Patricia O’Connor at Mountainview Park, Rathfarnham, Dublin 14 at a point in time after her murder on May 29th, 2017 in order to conceal the fact that she was already dead.

The trial continues before Mr Justice McDermott and a jury of six men and six women.