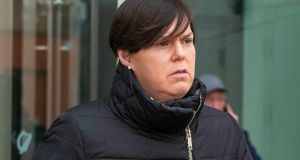 Det Sgt Lucy Myles said she took a very detailed entry in her notebook. “He stated ‘the stuff up the mountains was me’,” she told the court. Photograph: Collins Courts

A murder accused described to gardaí how he cut up the body of his partner’s mother beside a shallow grave “to make her lighter”, before he packed the parts of her body into black bags. He said her arms were the “hardest part” and he “spewed” a few times, the Central Criminal Court has heard.

Father-of-three Kieran Greene also told gardaí that retired hospital worker Patricia O’Connor was “verbally abusive” to his family on a “constant basis” and had threatened to have them killed.

Earlier, the jury heard that Mr Greene walked into a Garda station and told a detective that he had done “something terrible” and had scattered the body parts of Mrs O’Connor in the Dublin mountains.

A garda witness said Mr Greene told her: “I cut them up and threw them all over the place up there.”

The jury heard voluntary statementson Tuesday made by Mr Greene (34) to gardaí at Rathfarnham Garda station on June 12th and 13th, 2017. He has pleaded not guilty to murdering Patricia O’Connor (61) at her home in Mountainview Park, Rathfarnham, Dublin 14 on May 29th, 2017.

The court has heard that the body of Mrs O’Connor was dismembered into 15 separate parts that were found at nine different locations in the Dublin and Wicklow mountains between June 10th and 14th, 2017. Evidence has been given that the results of a post-mortem examination confirmed she suffered a “violent death”.

Garda PJ Foley told prosecution counsel Roisin Lacey SC that he noticed a man “of nervous disposition”, who he now knew to be Mr Greene, sitting alone in the waiting room of Rathfarnham Garda station at 7.15pm on June 12th, 2017.

Garda Foley said Mr Greene came to the front desk of the station and said he wanted to speak to someone in charge. “He told me the body up the mountains was that of Patricia O’Connor and he had a physical altercation with her, whereby she hit him with a hurl,” continued the witness.

Mr Greene said he had reacted by pushing Mrs O’Connor, she fell back and there was blood everywhere, said Garda Foley. The witness said the accused man told him it happened outside the bathroom of the house and he took Mrs O’Connor up the mountains once he saw that her body was unresponsive.

Det Sgt Lucy Myles told Ms Lacey that she was the member in charge at Rathfarnham Garda station on June 12th and was made aware Mr Greene wanted to speak to someone about what was found in the Dublin mountains. “He said he had done something terrible,” said Det Sgt Myles, adding that she took a very detailed entry in her notebook.

“He stated ‘the stuff up the mountains was me’,” she said. Det Sgt Myles said she asked Mr Greene what he meant by “the stuff” and he replied: “The body parts scattered in the Dublin mountains, I cut them up and threw them all over the place up there.”

“He then went on to say he had blackened out and didn’t know what happened but just threw them all over the mountains,” said Det Sgt Myles, adding that she immediately cautioned Mr Greene.

Det Sgt Myles said Mr Greene told her he had cut up his mother-in-law Patricia O’Connor but said she was not officially his mother-in-law. “I’m with her daughter 10 or 11 years and we have three kids together,” he said.

The witness said Mr Greene handed her a set of keys to a Toyota car and told her this was the car he had used to bring “her body away”.

Det Sgt Myles testified that she had asked Mr Greene why he killed her and he replied: “I was getting out of the shower when she came in and she started shouting and screaming at me. She then picked up one of the kids hurls outside the bathroom door and started hitting me. I grabbed it and hit her back. Next thing I remember is coming around and she was lying on floor with blood everywhere.”

The witness said Mr Greene said he put her in the boot of the car and buried her in a shallow grave in Wexford. Det Sgt Myles said Mr Greene explained he had panicked a few days later and went back to dig and cut her up before scattering her “all over the Dublin mountains.”

The witness said she then brought Mr Greene into the interview room at 7.45pm and took a voluntary cautioned memo from him. The witness said Mr Greene was “very fidgety but coherent” and told her he wanted to tell her “all about it”.

The witness said Mr Greene grabbed the hurl from her, hit her and didn’t know want happened next as when he woke up there was blood everywhere and he panicked. He carried her to the upstairs bedroom and a while later put her in the boot of the car, she said.

Det Sgt Myles said Mr Greene told her he drove to Wexford and stopped at a farmhouse on a narrow road. He said he couldn’t dig the grave much as his ribs were sore so only dug about a foot and covered her with clay, she continued.

The witness said Mr Greene also told her he began to panic a few days later and returned to Wexford to “cut her up” into a few pieces using a hacksaw.

Mr Greene told the witness he “threw everything up there in the mountains” including his clothes and the hacksaw.

The accused also told Det Sgt Myles that he “touched up” the paint in the rooms of the house and had used a mop and water to clean up the blood.

Det Sgt Myles said Mr Greene was very upset during the interview, was continuously rubbing his hands and there was a lot of sweat dripping from his face.

Under cross-examination from Conor Devally SC, defending Mr Greene, Det Sgt Myles agreed that the implication of Mr Greene’s account was that he had done all this completely on his own.

Giving evidence on Tuesday afternoon, Det Garda David Connolly told Ms Lacey that Mr Greene gave a second statement on the night of June 12th and told them what had happened “was eating him up” and he could not sleep and felt “sick, weird and horrible.”

Mr Greene said he had handed himself in as he could not live with the guilt and kept seeing his children’s faces.

Describing the incident with the hurl again to gardaí, Mr Greene said he just remembered waking up and Mrs O’Connor was on her back in the bathroom with blood beside her head. Mr Greene said it was a “bleeding miracle” he got her upstairs to her bedroom as she was heavier than he was. An hour later, he brought her downstairs again and put her in the boot of the car, covering her with blankets.

A third statement was taken from Mr Greene on June 13th, in which he said it had been a “long 10 years” and that Mrs O’Connor had been verbally abusive to them on a constant basis and was “always threatening to have them killed”.

Mr Greene told gardaí he was sobbing as he drove the car past Courtown in Wexford. He said he drove a further hour down the road before pulling up in an “alcove” beside a field, where he found “a spot”. He said he got her out of the car and placed Mrs O’Connor in “a hole”, which he dug with his hands and a stick, before covering her up with muck. He noticed a farmer’s house and shed were nearby and it was “playing on his mind” that she might be found.

In another statement taken on June 13th, Mr Greene said he went back to the field around five to seven days later as he was “panicking” and did not want a farmer to find her or his partner to find out. He said the plan was to wrap her in black bags and move her but he couldn’t as his right hand side was throbbing from where Mrs O’Connor had hit him.

“I decided I had to chop her up to make her lighter,” Mr Greene told gardaí, adding that he started with her legs and then her arms, which he said “was the hardest parts.” He said he then moved onto her head and “spewed” a few times before he came to the torso. He packed the body parts into around six black bags and loaded them into the car. “I filled in where she was buried. At this stage I didn’t know what I was going to do,” he said.

He dropped the first bag into a ditch past the Hell Fire Club by ripping the bag from the bottom, adding that he did not know what body part this was. Around 10 to 15 minutes later, he did the same thing with another bag. In total, he said he stopped the car around five or six times along the way and also got rid of his clothes, the boot liner, the hacksaw and hurl.

He said he got back into the car and sobbed. He said he was finally free. Asked what he was free from he said “all the torment and pain” she had caused.

On June 13th, Det Gda Connolly testified that Mr Greene directed gardaí to the location in Wexford to show them where Mrs O’Connor had been buried. After passing through Kilmuckridge, Mr Greene said “not too far now” and indicated a gateway on the side of the road, said the witness.

Det Gda Connolly said he asked Mr Greene to wait at the gate and they walked into a field, where he saw disturbed earth. “The scene we were looking at was consistent with what Mr Greene said happened at that place,” he said, adding that he could see “light brown hair” in the shallow grave. Mr Greene was arrested for murdering Mrs O’Connor at 7.30pm that night.

The trial continues before Mr Justice Paul McDermott and a jury of six men and six women.