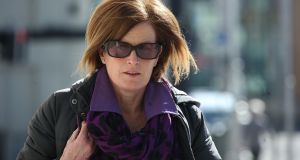 A defence counsel has questioned the evidence given by Mary Lowry (pictured) to the murder trial of Patrick Quirke, who is accused of the murder of her boyfriend Bobby Ryan. Photograph: Collins Courts. 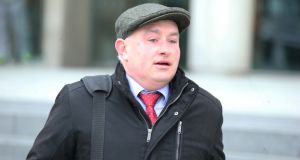 Patrick Quirke (50), of Breanshamore, Co Tipperary, has pleaded not guilty to the murder of Bobby Ryan, a part-time DJ known as ‘Mr Moonlight’. Photograph: Collins Courts.

Mary Lowry’s evidence against Patrick Quirke was “a piece of the most devious poison that has been delivered across the face of the Central Criminal Court for many a year”, a murder trial has heard.

In his closing speech to the jury, defence counsel Bernard Condon SC said Ms Lowry was manipulative, told lies and put a spin on her evidence as part of an attempt to “rewrite history”.

Mr Quirke (50), of Breanshamore, Co Tipperary, has pleaded not guilty to the murder of Bobby Ryan, a part-time DJ known as ‘Mr Moonlight’. Mr Ryan went missing on June 3rd, 2011 after leaving the home of his girlfriend, Ms Lowry, at about 6.30am. His body was found in an underground run-off tank on the farm owned by Ms Lowry and leased by the accused at Fawnagown in April 2013. The prosecution has claimed Mr Quirke murdered Mr Ryan so he could rekindle an affair with Ms Lowry (52).

Mr Condon accused Ms Lowry of trying to do a “devious” thing when she gave evidence about seeing Mr Quirke on the day Mr Ryan went missing. She was interviewed in June 2011 and told gardaí that she saw Mr Quirke at about 8.30am on her driveway that morning.

She said Mr Quirke would be coming and going at all times and she knew he was going away that weekend and probably wanted to get a few jobs done before setting off.

In a statement in 2013, following the discovery of Mr Ryan’s body, she said she did not know Mr Quirke was going away, that it was unusual for him to be there so early and that she noted he was “hot and sweaty and bothered looking”.

Mr Condon said she told this to a jury that is being asked to convict a man of murder. “That was a piece of the most devious poison that has been delivered across the face of the Central Criminal Court for many a year,” he added.

In cross examination Ms Lowry denied telling lies and said she cannot remember what she said seven years ago and added that she spoke “the truth to what my memory is”.

Mr Condon said Ms Lowry was trying to put something into the juror’s minds that there was something “nefarious” going on with Mr Quirke and asked, “why is she doing that?” He said it was worrying and “worthy of very serious concern.

Counsel told the jury to consider the quality, not the quantity of the evidence they have heard. Much of it, he said, relied on Ms Lowry and even if proven true, would say nothing about murder but suggest she was in a relationship with Mr Quirke that was at different times good, bad, and indifferent.

The end of the relationship was bitter and petty, like many relationships when they break up. Ms Lowry’s first attempt to revise history, he said, was when she said that the accused was not good friends with her late husband, Martin Lowry. All the evidence, counsel said, states otherwise.

In the witness box she described her affair with Mr Quirke as “sordid” but Mr Condon asked if this was just her talking with hindsight, looking back on something she now regrets and trying to put herself in the best light possible.

She had also said that she was “controlled” by Mr Quirke but, Mr Condon said, this is based only on Ms Lowry’s unsupported evidence. He asked them to consider the statement made to gardaí by her brother Eddie Quigley, who said he told Mr Quirke: “Mary will make up her own mind and you and me won’t change that”.

That, Mr Condon said, is a very different view of Ms Lowry to the “naive or vulnerable person she seeks to put across”. She was, counsel said, “about the business of manipulation. She was manipulative.”

He further asked whether the episode when she gave out to Mr Ryan for five hours travelling back from Bundoran because he had spent the previous night dancing and talking to another woman was evidence that Ms Lowry was controlled or controlling. She had made light of it, Mr Condon said, telling the jury that his ear must have been “reddened”. However, Mr Condon reminded them that Mr Ryan’s response was to suggest that they end the relationship.

He further reminded the jury that following the trip to Bundoran Ms Lowry said she was “fuming” and “raging” with Mr Ryan. He asked them to consider that the prosecution made much of Mr Quirke saying he was angry when he found out that Ms Lowry was seeing Mr Ryan, but she was saying similar things in the context of a relationship.

He dubbed as a “tabloid headline” a phrase used by gardaí that Mr Quirke had “sex on demand and cash on demand” from Ms Lowry. Mr Condon said there was no suggestion he had sex on demand. This was, he said, a consenting relationship between adults.

He said Mr Quirke had been coherent and consistent through many hours of questioning by gardaí who engaged in “nods and winks” in their approach. There is also nothing wrong, he said, with the financial relationship between Mr Quirke and Ms Lowry.

Ms Lowry also stated that she was assaulted by Mr Quirke in late 2010 or early 2011 when he was asking her for compensation after his herd was infected by a cow from her late husband’s herd. Mr Condon said you would never be able to convict Mr Quirke if this were an allegation in court.

He further reminded the jury that Ms Lowry would later tell gardaí, in the days after Mr Ryan’s disappearance, that Mr Quirke would have your best interests at heart and that she “always got on fine” with him.

He told the jury that if she was assaulted by Mr Quirke then she was lying to gardaí when she said she always got on fine with him. When confronted with this during cross examination, Ms Lowry said she was assaulted and she did not lie. Mr Condon said this was a person capable of saying “black is white” and much of what the prosecution used to suggest that Mr Quirke was a “bad person” was based on her evidence.

The jury, Mr Condon said, is entitled to the “unvarnished truth”, not spin. He said she was the “base line fuel” that the prosecution was using to push their case but she is “very very wanting”.

Mr Condon will continue his speech to the jury on Tuesday in front of Justice Eileen Creedon.