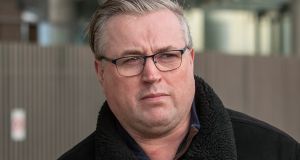 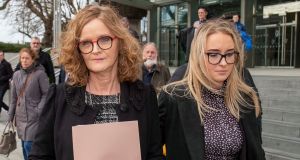 Mary Mullally (left), a sister of Patrick Mullally, is pictured leaving court on Wednesday with her family after the sentencing hearing for Jonathan Dargan. Photograph: Collins Courts.

A professional martial arts instructor who killed an innocent passerby with a single punch in a late night street assault has been jailed for 5½ years.

Jonathan Dargan (49) was found guilty of the manslaughter of Patrick Mullally (56) by knocking him to the ground with a punch after the victim and another man stopped to intervene in a drunken row between Dargan and his girlfriend.

Mr Mullally and Shane Cunningham had been out celebrating the former’s recent retirement from Guinness when they encountered Dargan on the Harold’s Cross Road in Dublin at about 4am on March 6th, 2016.

When Dargan began “swinging” punches, Mr Mullally put his hands up to shield himself. At least one punch connected, shattering his jaw and cheekbone and knocking him to the ground.

Mr Mullally suffered a subdural haemorrhage and brain trauma due to a blunt trauma to the face and head and died the next day.

The defendant, a Taekwondo instructor who had worked as a doorman at Lillie’s Bordello nightclub for two decades, admitted “lashing out” with a punch.

He claimed that he was surrounded by the men and felt in fear and was acting in self-defence.

Ms Justice Pauline Codd said this was a particularly chilling aspect of the case and evidence of a man who was in control of the situation and not somebody in fear. She said the jury had rejected Dargan’s defence and that CCTV evidence also showed this not to be the case.

She noted that Dargan’s martial arts training meant he had a knowledge of the force and impact of his own strength. She said for a man with this strength and capacity to strike a defenceless and intoxicated man was an aggravating factor.

The judge said the victims were entirely innocent and had approached Dargan to assist a woman and to “do the honourable thing”. The violence was unwarranted and Dargan was angry and in a state of intoxication.

A passing cyclist told the trial that when he earlier stopped by the rowing couple, Dargan told him he to “f**k off and mind his own business” and that “he’d kill him or stamp on his head on the ground”.

Ms Justice Codd noted in mitigation that Dargan had led a blameless life up to this point and that he had shown great support and strength to his family when his mother was the innocent victim of a fatal shooting by a neighbour. The killer was later found not guilty by reason of insanity.

She suspended the final six months of a six year prison term.

In a statement outside the court, Mr Mullally’s sister Mary Mullally thanked the judge, jury, witnesses, prosecution and others on behalf of the family for contributing to “getting Paddy justice”.

“We’ll be forever grateful,” she said. “Four years later we’re still absolutely devastated by the loss of our beloved Paddy. His life revolved around being a devoted dad, caring brother, fun uncle and a cherished friend.

“We as a family miss him everyday but there is also a huge group of friends who are grieving alongside us. No matter what happened today, sadly we’re left with a life sentence.”

1 Shane Ross: ‘I lost a friendship with Mattie McGrath completely. He got totally personal’
2 Murder in a crowded house: The full story of the Patricia O’Connor trial
3 Coronavirus: Aer Lingus cabin crew in self-isolation after passenger’s positive test
4 Areas advised to ‘stop everything’ as Storm Jorge hits Ireland
5 ‘Nobody cares’: Children freeze to death as Syrians flee onslaught in Idlib
Real news has value SUBSCRIBE