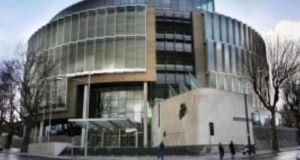 A woman has told her former partner’s murder trial she had visited him in prison, where he told her he had stabbed the deceased.

She was giving evidence to the Central Criminal Court on Wednesday in the trial of a 34-year-old Kilkenny man accused of murdering a 25-year-old man in Waterford last year.

Tadhg Butler, with an address at Seafield in Tramore, Co Waterford is charged with murdering Michael O’Dwyer at that address on January 10th, 2014.

Mr Butler, also known as Thomas O’Grady and originally from Kilkenny, has pleaded not guilty to murdering his fellow Kilkenny man by stabbing him once in the chest.

Mary Rose Burke testified that she had five children with the accused and she had split up with him more than three years ago.

She said she visited him in Cork Prison on January 13th, 2014, after he had been charged with Mr O’Dwyer’s murder.

She said he asked if he could apply for bail to her address, but she said no.

“I asked Thomas what happened that night,” she testified. “He said he couldn’t remember much, that he was drunk and had taken Valium, and that the boy was a good friend of his and he only stabbed him once.”

She said he never went into any specifics. She said that he mentioned nothing about remorse or an apology to the O’Dwyer family.

“He said he was going to try to have it reduced to manslaughter,” she said.

She was then cross-examined by Brendan Grehan SC, defending.

“Would it be fair to say that nothing would please you more than to have the accused out of your life?” he asked.

“We were already finished,” she said. “He was already out of my life.”

She agreed that theirs had been a bad relationship, which didn’t end well.

“You’re the last person the accused would trust because you would do anything to get rid of him out of your life,” suggested Mr Grehan.

He asked her why she had gone to see him.

“I pitied him,” she said. “It was in the early stages. I didn’t know much about the investigation.”

“You were there digging for information, seeking to paint him in as black a light as possible,” suggested Mr Grehan.

He put it to her that the accused told her there was no argument.

“You asked him how many times he stabbed Michael and he said that, as far as he knew, he was stabbed only once,” continued Mr Grehan. “It was your suggestion that it might get dropped to manslaughter and he said murder or manslaughter didn’t matter; he didn’t do it.”

Ms Burke denied this too.

“And off you trot to the guards and make a statement,” he said.

“I didn’t trot to the guards. They came to my house,” she replied.

“And then you had something juicy to tell them,” suggested the barrister.

“I told them the truth,” she said.

She denied his final suggestion that she had gone to the prison with an agenda to do his client down.

Denis Vaughan Buckley SC, prosecuting, had opened the trial to the jury in the morning.

He said Mr O’Dwyer and two others were in Tramore on the night of January 9th at the invitation of the accused. He said they were drinking in Mr Butler’s house.

“At some stage, one of the people present took a knife and put it into the chest of Michael O’Dwyer,” he said.

He said that the emergency services arrived at 11.20pm and found Mr O’Dwyer lying on the ground outside. He was taken to hospital, where he was pronounced dead two hours later.

He said gardaí saw the accused outside the house when they arrived, but that he ran back inside and locked the door. The gardaí forced their way in, searched the house, but there was no sign of Mr Butler, he said.

However, he was later arrested and taken to Tramore Garda station.

Mr Vaughan Buckley said a postmortem exam found Mr O’Dwyer had died of a single stab wound to the chest, injuring his heart and lung.

“I say there’s more than ample evidence on which you can conclude the accused is guilty of murder,” he said.

The trial continues before Mr Justice Patrick McCarthy and a jury of eight women and four men. It is expected to last two weeks.