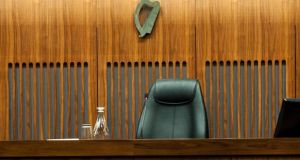 A Louth man accused of IRA membership and directing the activities of the dissident organisation denied buying Shamrock glucose in his alleged capacity as an IRA member, the Special Criminal Court has heard.

Previously, the court had heard an audio recording of a conversation between Mr McGrane and Donal O’Coisdealbha in the snug of a Dublin pub that had been bugged by garda detectives in which the accused man spoke of using Shamrock glucose to manufacture explosives.

He has also denied directing the activities of an unlawful organisation, styling itself the Irish Republican Army, otherwise Óglaigh na hÉireann, otherwise the IRA, between the dates of April 19th and May 13th, 2015.

Detective Garda Colm Finnerty, of the Special Detective Unit, told prosecuting counsel Tara Burns SC on Wednesday that on April 15th 2015, Mr McGrane was interviewed by gardaí under Section 2 of the Offences Against the State Act.

The section allows a court to draw inferences from a suspected person’s failure or refusal to answer questions regarding alleged IRA membership.

The court heard that Mr McGrane denied he was a member of the IRA.

Garda Finnerty said the accused man was also asked if he had ever bought Shamrock glucose in his capacity as an IRA member and he again denied membership.

Earlier, the court heard “belief evidence” from Chief Supt Sean Ward that the accused man was a member of the IRA between the dates in question.

He said men convicted and jailed by the Special Criminal Court also attended these marches.

The court was told that the prosecution had closed its case.

Michael O’Higgins SC, for Mr McGrane, said the defence was not going into evidence.

The court will listen to closing speeches from the prosecution and defence on Thursday morning.