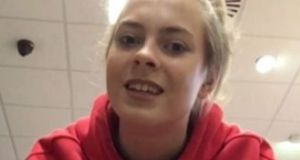 Boy A and Boy B were convicted of murdering 14-year-old Ana Kriégel in a derelict farmhouse in Lucan in May 2018.

The sentencing of the two boys convicted of the murder of 14-year-old Ana Kriégel has been adjourned to October because psychological assessments of the teens have not been completed.

Ana’s parents Patric and Geraldine were preent in court on Monday morning along with the boys and their parents.

It was the first court appearance of the children - known only as Boy A and Boy B - since their conviction on June 18th.

Boy B was convicted by a jury of luring Ana from her home at 5pm on May 14th, 2018 on the pretence of meeting Boy A, who Ana was “interested” in. Boy A then allegedly violently sexually assaulted and murdered her in the derelict farmhouse as Boy B watched.

Boy A had pleaded not guilty to the murder and sexual assault “involving serious violence” of Ana Kriégel on May 14th, 2018, at Glenwood House, Laraghcon, Clonee Road, Lucan in Dublin.

Boy B had pleaded not guilty to the murder of the girl on the same date.

The court heard the two boys, who were 13 at the time of the killing and are 14 now, have yet to meet the psychiatrists who were asked by the court to carry out pre-sentencing reports.

Mr Justice Paul McDermott said he was aware of the need to deal with the matter expeditiously, but that he has to have regard to “practical matters.”

Probation reports have been prepared and are available to the court.

Oberstown Child Detention Campus, where the boys have been on remand since their conviction, has also prepared reports on the boys’ behaviour and the facilities it can provide, prosecuting counsel Brendan Grehan SC told the court.

Counsel for Boy A, Patrick Gageby SC, said the defence is arranging for its own psychological assessment of the boy.

The director of the Central Mental Hospital, Prof Harry Kennedy, had been asked by the court to put together an assessment package for the boys.

He has proposed appointing two teams of experts, comprising an adult forensic psychiatrist and a child psychiatrist, to examine each boy.

“That will take some time,” Mr Justice McDermott said.

“It is extremely important court has all the relevant assistance for sentencing.” he added.

Geraldine and Patric Kriégel have completed their victim impact statements. Mr Justice McDermott said he was happy to hear those at any stage but the couple indicated they would like to read them out on the same day as the sentencing hearing.

The judge remanded the boys in custody until October 29th and reaffirmed his earlier order preventing identification of the boys in the media or on social media.