How the gardaí caught Graham Dwyer

The garda chief superintendent Diarmuid O Sullivan, who led the investigation into the death of Elaine O'Hara, has pays tribute to to her family. 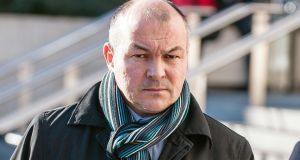 Det Sgt Peter Woods: Sought to get an “uncontaminated account” of events from Dwyer during initial interviews. Photograph: Collins Courts 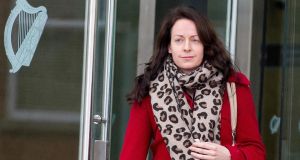 Sarah Skedd: A civilian crime and policing analyst, she noticed a lot of the texts to and from the Nokia phone occurred while it was in the Dublin 2 area from Monday to Friday. Photograph: Court Collins 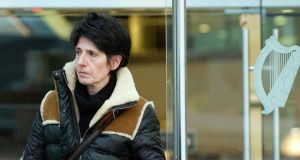 When Det Sgt Peter Woods knocked on the door at Kerrymount Close, Foxrock, at 7.06am on October 17th, 2013, and saw architect Graham Dwyer appear behind the glass in his pyjama bottoms, it was the culmination of an exhaustive five-week period in the Garda investigation into the disappearance – and ultimately murder – of Elaine O’Hara.

Ever since anglers William Fegan, James Fegan and Mark Quinn fished a bag of items out of the Vartry reservoir on September 10th, 2013, and handed it in to Roundwood Garda Station the following day, detectives had been meticulously weaving together different strands of evidence to reveal what had become of missing woman Elaine O’Hara.

Three days later, dog walker Magali Vergnet came across human remains on Killakee Mountain and alerted gardaí. They would later be identified as those of Elaine O’Hara, but due to decomposition, and as just 65 per cent of the skeleton was recovered, the cause of death was deemed “indeterminable”.

At this point – without a cause of death and with so little of the remains recovered – gardaí could not know the circumstances of O’Hara’s demise, and, crucially, whether or not to suspect foul play.

But another three days later, Garda James O’Donoghue from the Roundwood station decided sweeps of the Vartry reservoir – undertaken after the anglers handed him the bag of items from the water – were unduly hampered by poor visibility and he returned to the scene.

This time weather conditions were clear and he entered the water. He dug down in the mud with his hands and began to retrieve more items. Among them was a set of keys with a Dunnes Stores loyalty card. O’Donoghue contacted Dunnes Stores, relayed the serial number of the loyalty card, and asked for the identity of the owner. The next day, they contacted him to say the card belonged to Elaine O’Hara.

Detectives involved in the Garda investigation into the death of O’Hara now had real cause to believe she may have been unlawfully killed. The Garda Water Unit conducted a fingertip search of the reservoir bed and a number of other items were retrieved, including two Nokia mobile phones.

At this point, the phones had been lying on the bed of the reservoir for more than a year. It fell to financial crimes analysts with the Criminal Assets Bureau and officers from the Garda telecommunications and computer crime units to examine both of these phones. They also examined O’Hara’s iPhone and laptop, which were recovered from her apartment at Belarmine Plaza in Stepaside.

Hundreds of text messages were retrieved from the phones. Gardaí established that the two Nokias were in almost exclusive contact with each other. The detectives were able to retrieve deleted data from the phones, which were stored in what they described as “unallocated clusters”. They now believed one of the Nokia phones found in the reservoir had been used by Elaine O’Hara. They also established that O’Hara had been in contact with an 083 number. The content of messages between her and this number – as well as the communication between the two Nokia phones – formed a central plank in the investigation.

The text messages painted a picture of her life and her activities in the months and years preceding her disappearance. The gardaí learned that she was in contact with an individual or individuals who expressed fantasies and desires related to engaging in acts of stabbing during sexual intercourse. A text between her and the 083 number on May 24th, 2011, referenced stabbing a sheep and wanting “to do a woman next”.

The focus of the investigation now moved to establishing the identity of the owner or owners of the 083 number and the second Nokia retrieved from the reservoir. Brid Wallace, a detective with the Garda Computer Crime Unit, delved deeply into O’Hara’s online activity and found she was a member of BDSM website alt.com. Through the website, O’Hara had been in contact with a number of men, and detectives moved to locate and interview these individuals with a view to cultivating further leads. Wallace also found that the 083 number was saved in O’Hara’s iPhone under the name “David”. A search on her laptop found the same number was saved as “Graham’s phone number”.

A text from the 083 number on June 13th, 2011, referenced a 15 per cent pay cut and coming fifth in a flying competition. At this point, detectives suspected the owner of the 083 number may be a pilot and searched for leads on that basis. Later, one of the investigators suggested that perhaps the text referred to model aircraft.

An officer then searched the internet for flying competitions and found that a man named Graham Dwyer had come fifth in the East Coast Scale Championships. This was the first time Peter Woods, who led the investigation, had heard the name. He entered it into the Garda Pulse system and found that Dwyer, with an address in Foxrock, had lodged a complaint about a stolen bike from his office at A&D Wejchert Architects on Baggot St.

Detectives would later learn that Dwyer’s salary had been cut by approximately 15 per cent around the time of the message from the 083 number. Other texts extracted from the phones made reference to a new baby which coincided with the birth of Dwyer’s daughter, and texts about a holiday at a time when Dwyer was taking time off work.

Seperately, civilian crime and policing analyst Sarah Skedd had embarked on an analysis of the use of the phones using cell masts. She noticed a lot of the texts to and from the Nokia phone occurred while it was in the Dublin 2 area from Monday to Friday. It also used phone mast cells in the evenings in south county Dublin, though there were far fewer text messages during these times. Skedd also discovered that the 083 phone most frequently used a cell site at ESB headquarters on Fitzwilliam Street.

On that basis, Woods believed it was “hugely significant” to have identified a suspect with a home address in south county Dublin and a workplace on Baggot St.

Skedd also established that on July 4th, 2012, the Nokia phone was used in Galway City. She then searched data, obtained from toll-booth operators, for vehicles that went through the M6 toll booth and the M4 an hour later that had an owner with an address in south county Dublin. She found a vehicle with the registration number 99G11850. It was registered to Graham Dwyer.

It became clear through the use of toll records and records of mobile phone top-ups that the pattern of movement of the 083 phone and the second Nokia from the reservoir exactly matched the movements of Dwyer when he travelled to different parts of the country.

Gardaí contacted mobile network Three, who told detectives the 083 number was a pre-pay phone purchased in March 2011 under the name “Garoon Caisholn” of Oak Lawn, Clerihan, Co Tipperary. Detectives would later learn that Dwyer knew a man named Gordon Chisholm. Dwyer would also inadvertently reveal during a Garda interview after his arrest that the address almost matched that of his sister’s.

Paul Healy, an employee of the 02 store on Grafton Street, Dublin, informed gardaí that at approximately 4.30pm on November 30th, 2011, he sold two Nokia mobile phones to a single individual. He said that because it was a pre-pay deal, the customer was not required to provide identification. After this date, Skedd noticed that contact between O’Hara’s iPhone and the 083 phone “largely ceased” for a time.

Following further inquiries, gardaí established that Dwyer was from Cork, was married with two children, and flew model airplanes as a hobby. Det Sg Woods obtained images of Dwyer from the internet and reviewed CCTV footage from Belarmine Plaza where O’Hara lived. He was satisfied that a man who made regular visits to the apartment “bore a very good resemblance to Mr Dwyer”.

On the morning of October 17th, 2013 – just five weeks after the discovery of the items in the Vartry Reservoir – Woods led a team of more than 20 gardaí in a dawn raid of Dwyer’s home in Kerrymount Close, Foxrock. When Dwyer came to the door, Woods identified himself and informed Dwyer that he was being arrested for the murder of Elaine O’Hara.

The team of gardaí spent the entire day searching the property. Computers, phones and cars were seized. An hour later, a separate team of gardaí went to Dwyer’s workplace, A&D Wejchert on Baggot Street, and seized more computers, as well as other items, including records of Dwyer’s working hours.

When detectives arrived at Blackrock Garda Station with Dwyer at 7.41am, he demanded to know what evidence the gardaí had against him. At this point, Woods did not reveal anything and chose not to brief Dwyer’s solicitor John Dunphy. He wanted to get an “uncontaminated account” of events from Dwyer.

Over the course of the following 24 hours, detectives carried out five interviews with their suspect. Woods explained to Dwyer that because of inference provisions in the Criminal Justice Act, there could be consequences for his failure to offer information. In effect, his silence could further incriminate him.

He consistently denied being the user of the 083 number or the Nokia retrieved from the reservoir but could not explain the correlations between his life and that of the person sending the texts.

Woods attempted to keep the interviews as conversational as possible, believing this was the best way to elicit information. This “conversation management approach” led to seemingly innocuous discussion about Dwyer’s connections to different parts of the country – something which would strengthen the Garda’s case linking him to the phones and Woods’s belief that he had got his man.

“He gave us more than we bargained for,” Woods would later reflect.