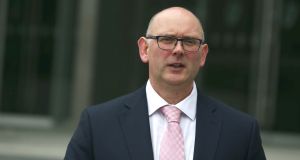 Seán Lucey leaving court after he was found guilty to one count of assault causing harm to Colm Hand. Photograph: Collins Courts

A public order unit garda who assaulted an RTÉ cameraman during street protests has received a fully suspended one year prison sentence.

Judge Melanie Greally said the assault by Garda Sean Lucey (42) during anti-racism protests in Dublin city centre in February 2016 was an unjustified act of aggression.

Lucey stepped forward from a line of public order unit gardaí and struck the camera of Colm Hand, an experienced RTÉ cameraman covering the protests.

He then again swung his baton with full force and struck Mr Hand to the groin.The victim sustained significant bruising and pain.

Judge Greally rejected a characterisation by Lucey of the assault on Colm Hand as an error of judgement and excessive conduct.

She said that Lucey’s statement of regret fell short of an apology and that an offer to make a donation to a charity of Lucey’s choosing did not represent a suitable gesture of remorse to the victim.

“There are public interest issues at play in this case. A transgression of this kind must be seen to carry serious consequences,” she said.

She said she would suspend the prison sentence on the basis of Lucey’s absence of previous offending and his unblemished record of service with gardaí.

Judge Greally said given these facts, she viewed Lucey’s offending as an aberration.

Garda Lucey, who has been stationed at Crumlin Village and Sundrive Road Garda stations, had pleaded not guilty at Dublin Circuit Criminal Court to one count of assault causing harm to Mr Hand at Cathedral Street, Dublin city centre on February 6th, 2016 and to damaging his camera.

Following a five-day trial last December a jury convicted him of assaulting Mr Hand and acquitted him of criminal damage.

Lucey was detailed to a public order unit to deal with confrontations between anti-racism protesters and gardaí who were trying to prevent protesters from getting to supporters of a “far right group”.

Mr Hand told the court in his victim impact statement that he had been in the area as part of his work for the public service broadcaster and did not pose a threat to anyone. He outlined the effects the incident and subsequent trial process had on him including sleeplessness, worry and stress.

“What happened that day shattered my confidence and I have never really recovered,” he told the court.

Judge Greally said that on the day in question, there was an element in the groups gathering that was intent on having a violent confrontation and gardaí were under intense pressure.

She said she had the highest respect for the work of gardaí. She said the public rely on gardaí and the public order unit to exercise their significant powers with restrain and self-control.

She said that assessing the necessary use of force at public order events was easier said than done, but she rejected Lucey’s description of his actions as an error of judgement.

Judge Greally said that Mr Hand was conspicuously engaging in the job he was hired to do and did not at any time present a threat to anyone.

She said the fleeting lapse of control by Lucey involved a blow being struck at full force into the victim’s groin. She said the blow had the potential to cause serious physical injury and did indeed result in a deterioration in physiological and emotional well being and qualify of life of Mr Hand.

In determining her sentence, Judge Greally said she was also taking into consideration Lucey’s family circumstances, the possible consequences of a criminal conviction for his career, and favourable character references.