Family of Kerry farmer claim ‘justice not served’ by court 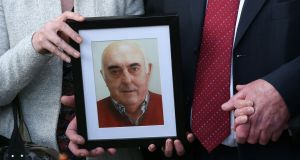 The family of the late Anthony O’Mahony,hold his picture outside the Central Criminal Court in Dublin after Michael Ferris was sentenced to five years. Photograph: Laura Hutton/Collins. 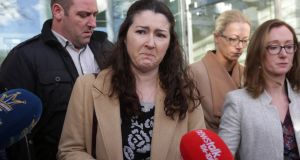 Niece of the late Anthony O’Mahony, Ann O’Carroll (centre) speaks to the media outside the Central Criminal Court in Dublin. Photograph: Laura Hutton/Collins. 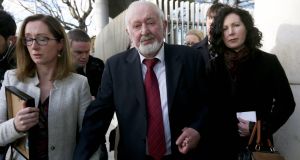 The family of a farmer who was “gruesomely” killed when a neighbour repeatedly drove a teleporter into him have said they “strongly believe that justice was not served” in the case and it was “another example” of “victim blaming” in Irish courts.

Michael Ferris (63), who drove the prongs of a teleporter into his neighbour Anthony O’Mahony (73) after a decades-long row about a noisy bird-scarer, was jailed for five years at the Central Criminal Court for manslaughter.

A jury sitting in Tralee found Ferris not guilty of murder but guilty of by a majority verdict of 10 to two.

Ms Justice Carmel Stewart called the killing “truly gruesome” and said Ferris had inflicted “horrific and horrendous” injuries on the deceased which defied belief and imagination.

The victim’s niece, Ann O’Carroll, spoke outside the Criminal Courts of Justice after the sentence hearing.

“Our family strongly believe that justice was not served in this case. The just outcome would have been a conviction for murder given that the crime was clearly deliberate and premeditated as outlined during the trial,” she said.

“The trial was a deeply distressing and painful ordeal for our family. Our brother, uncle and friend was taken from us in the most brutal and violent way possible. This pain was made worse by the blackening of Anthony’s good name and character during the trial when he was not there to defend himself. And now our pain has been exacerbated by the lenient sentence imposed today.

“The defence legal team’s use of alleged provocation in this case allowed the jury to return a conviction for the lesser charge of manslaughter. To our family it felt like they were using this for a justification for the killing of Anthony and as a result we believe it denigrates the value of Anthony’s life.

“Victim blaming occurs daily in other courts cases in Ireland and this is clearly another example of it in our criminal justice system. We would like to thank the guards, our neighbours, family and friends for their support during this difficult time. We are devastated at the loss of Anthony and we will never recover from this,” she said.

During the trial, the defence claimed the community in Rattoo was being “oppressed” by Mr Mahony and living in fear of a “totally unreasonable person”. The defence argued that there had been cumulative provocation because of the behaviour of the deceased.

Seamus O’Mahony, the deceased’s younger brother, said in his victim impact statement last month that the manner in which the good character of Anthony was “shredded” during the trial was “even more harrowing” than hearing the “grotesque details” of how his life ended.

“Every story has two sides and there was only one side of the story told during this trial,” Mr O’Mahony said, adding that his brother was not there to defend his “good name”.

Mr O’Mahony said his family now “live in fear” knowing that Ferris will be released from prison some day.

“He ( Ferris) said he snapped once, what is to stop him snapping again and doing something similar?” he asked.

He said the deceased’s family have felt “totally cut off and isolated” in their north Kerry community since the trial, with people “too afraid” to speak to them. “People will remember my brother the way he was depicted in the trial and this hurts us greatly,” he said.