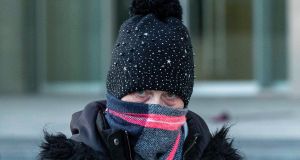 A woman accused of impeding the investigation into her mother’s alleged murder told gardaí that her partner told her he was sorry for hurting her mother and did not mean to do it but she had been “lashing out” at him with “a hurl”, a trial has heard.

The woman said father-of-three Kieran Greene, who is accused of murdering retired hospital worker Patricia O’Connor at her Rathfarnham home, also told her: “I have to hand myself in, I can’t live with this.”

The jury on Monday heard a voluntary statement made by the daughter of the deceased, Louise O’Connor, to gardaí on June 12th, 2017.

The court has heard that the body of Mrs O’Connor was dismembered into 15 separate parts that were found at nine different locations in the Dublin and Wicklow mountains.

Evidence has been given that the results of a post-mortem examination confirmed that she suffered a “violent death”.

Garda Andrew Quinn told prosecution counsel Roisin Lacey SC that he was on duty in Rathfarnham Garda Station on June 1st, 2017, when Augustine O’Connor and Richard O’Connor, the husband and son of Mrs O’Connor, made a missing person report concerning Patricia O’Connor. Garda Quinn said he entered her details into the Pulse system.

Garda Quinn testified that he had obtained Louise O’Connor’s telephone number at the time in order to find out when she had last seen her mother. He continued to keep in contact with Louise O’Connor and obtained her mother’s bank account details for Permanent TSB. Gda Quinn said he was satisfied no transactions had occurred on the deceased’s Permanent TSB account since May 29th, 2017. “At one stage, we discussed the family providing a photograph and make the fact Patricia O’Connor was missing public,” he added.

Garda Quinn said he was also on duty at Rathfarnham Garda Station on June 12th, when he was made aware that Mr Greene was in the station claiming to have killed and dismembered the body of Mrs O’Connor. The witness said he took a statement from Louise O’Connor that night at Millbrook Lawns in Tallaght.

In her statement, Louise O’Connor said she lived with her mother and father, her five children and her partner of 10 years Kieran Greene in Mountainview Park in Rathfarnham.

Louise O’Connor told Garda Quinn that her mother left the home when she was five or six years of age as the relationship between her parents ended. Her mother moved back into Mountainview 16 years ago and retired from her job in Beaumont Hospital the previous July, she continued. “Since her retirement, she has been extremely hard to live with, she is always irritated and constantly giving out,” she explained.

Louise O’Connor said that on May 29th, the day she said her mother left the house, her mother had been constantly screaming and arguing about “stupid things”. Her mother would not give her pension receipts that she had asked for and there was an argument about car insurance, she said. She explained that her mother had tried to hit her with a teapot and was roaring at Mr Greene. “There were also arguments about her smoking weed and her regular supplier had none left and she wanted me to get some and I wouldn’t. This annoyed her too,” she said.

In her statement, Louise O’Connor said she brought her children and dad to the park in order “to get away” at 7pm that night. Her mother and Mr Greene stayed in the house, she said, explaining that her partner told her he was going to have a quick shower and would follow them to the park.

When they returned to the house, Mr Greene opened the door and was “shaking and distressed” and told her that her mother was “worse now” and acting like “a raving lunatic”, she said. Mr Greene explained to her that he was having a shower, had not locked the door properly and Mrs O’Connor walked in. There was a row and Mrs O’Connor told Mr Greene that she could not even go to the toilet in her own house and the men in the house “were pathetic excuses for men”, she said.

Louise O’Connor said her father Augustine came home from the park around 9.30pm and the kids went to bed. “Mam was storming around the house banging and making noise and a few minutes later I heard the door slam. I could see her making her way up the road and she seemed to have a bag with her. She was heading in the general direction of Nutgrove. Prior to leaving the house she said: ‘I’ll be back when that bastard pops his clogs to get what is mine’,” said Louise O’Connor, adding that she told her father what had happened.

The mother-of-five said she was “wrecked” at this stage, went to bed at 11pm and did not wake up once she fell asleep. Mr Greene was lying on the couch, she said.

Louise O’Connor said she got up at 7am the following day. When she came downstairs, Mr Greene was getting ready to paint the bathroom, she said, adding that her mother had been on to him to paint it. “He said he was going to get a few jobs done before mam came back,” she said. Mr Greene dropped the children to school and her former partner Keith Johnston helped him paint the bathroom, she continued, adding that both men get on well.

Louise O’Connor said, “Mam didn’t have a phone as she had given it to me, she wouldn’t replace the phone. As the week went on we became worried about her,” she said.

Louise O’Connor said Mr Greene was getting “more stressed and irritated”. “This evening Kieran lost it, he was crying and hugging the kids and saying if you do something wrong you have to face up to it,” she said.

She said Mr Greene told her that Mrs O’Connor had returned to the house on night of May 29th.

Louise O’Connor said Mr Greene told her: “I’m sorry I hurt your mam, I didn’t mean to, she was lashing out at me with a hurl. I took the hurl off her, the next thing we were on the floor. I don’t know what happened, I panicked.”

Louise O’Connor said she did not know what to think and thought it was “a sick joke”. Mr Greene told her he had “to hand himself in” as he could not live with this, she said. “I was stunned, I asked him where it happened and he said in the bathroom. He rang his mam and dad and told them what happened and then went down to the Garda station,” she concluded.

In cross-examination, Garda Quinn agreed with Conor Devally SC, for Mr Greene, that Augustine O’Connor told him that his wife had left the home before, he had no relationship with her at the time and there were frequent arguments.

The trial continues tomorrow before Mr Justice Paul McDermott and a jury of six men and six women.