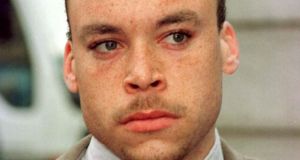 Mark Nash (42), who has last addresses at Prussia Street and Clonliffe Road in Dublin, has pleaded not guilty at the Central Criminal Court to the murder of Sylvia Shields (60) and Mary Callanan (61) between March 6th and 7th 1997. Photograph: Collins.

The trial of a man charged with a 1997 double murder has heard that a confession allegedly made by him in relation to the killings was “produced” by gardaí.

Mark Nash (42), who has last addresses at Prussia Street and Clonliffe Road in Dublin, has pleaded not guilty at the Central Criminal Court to the murder of Sylvia Shields (60) and Mary Callanan (61) between March 6th and 7th 1997.

In December 1999, now Assistant Garda Commissioner Derek Byrne participated in an interview with Mr Nash at the Bridewell Garda station concerning his confession to gardaí in Galway on August 16th 1997 to the murder of two women in Grangegorman.

The court heard how the accused described his confession at that time to Mr Byrne as “a note” made in Mill Street Garda station “produced by gardaí in Mill Street” .

The jury of six men and five women also heard how Mr Nash said in his statement to Mr Byrne in December 1999 that “no matter how nice you guards are, I don’t trust the gardaí, when you sit through that type of thing, it’s better to keep your mouth shut as words are twisted.”

Mr Byrne also took possession of black caterpillar boots following a search of the home of Mark Nash which he had in his control until May 19th 2005, and these items were then handed over to Det Sgt Alan Bailey, now retired.

Mr Patrick McGrath SC, for the defence, told the court that in 1997 two people had confessed to the murder of two women in Grangegorman.

Dean Lyons, now deceased, was the first person who made an independent admission. The second person was Mr Nash and there was no connection between either party.

The court heard that in July 1997, Mr Lyons was charged with the murder of Mary Callanan in sheltered accommodation in Grangegorman.

Then on August 16th and 17th 1997, the court heard that Mark Nash made an independent admission to the murder of the two women in Grangegorman.

This “was probably unprecedented in the history of the State”, said Mr McGrath.

“I had not experienced this previously and there was concern to get to the bottom of how these independent admissions could be made and to get to the truth,” Mr Byrne told the court.

Three senior gardaí were appointed to investigate this at the time - James McHugh, a former Assistant Commissioner of An Garda Síochána with responsibility for the South East region in August and September 1997; Detective Superintendent Martin Donnellan and Mr Byrne.

“The fact three officers were appointed was a matter of the seriousness,” added Mr McGrath.

Th court heard that it was not until 1999 that Mr Lyons made a retraction of his admissions through a solicitor in a solicitor’s office.

Then team of gardaí­ was appointed “to establish the voracity of the truth and to establish who the correct person was effectively,” Mr Byrne said.