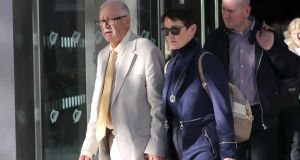 Ana Kriégel’s parents Patric and Geraldine leaving the Central Criminal Court on Tuesday. The grandfather of Boy A, who was convicted of murdering their daughter, said he offered the Kriégel’s his ‘utter sympathy’ for what had happened. Photograph: Niall Carson/PA Wire.

The grandfather of Boy A, who was convicted of the murder and aggravated sexual assault of Ana Kriégel, has said his grandson is “incredibly remorseful” about what happened to the teenage girl and wished it never occurred.

Taking the stand at the Central Criminal Court on Tuesday, the man said he had “sincere and utter sympathy” for the Kriégel family and could not imagine their loss.

“The death of a child is a parent’s worst nightmare especially given the horrific circumstances of Ana’s death. Having listened to Ms Kriégel, who spoke so elegantly and passionately, what I have here does not go close to what she said about Ana and the consequences of her death,” he said.

Boy A’s paternal grandfather said he wanted to express his family’s “sincerest regret and remorse” and that he knew that the teenager was “incredibly remorseful for what happened” and wished “it never occurred”.

He said the period between the ages of 11 and 13 can be a difficult time for boys, both mentally and physically. He said boys at this age can be difficult for parents and teachers to manage but the majority of them remain “unaffected by new circumstances”.

The man said his grandson was “one of the majority”, who loved practical subjects such as art, science and woodwork, and that nothing pleased him more than preparing detailed drawings and making models.

“I am personally heartbroken that my much-loved grandson could have been involved in something like this,” he said, adding that his grandchild was a loving, caring and kind child, who never showed aggression or ill-temper.

He said Boy A was much-loved by his parents and grandparents.

“There will be a major gap in all our lives without his constant presence. Our lives have been turned upside down, all going through huge emotional turmoil and loss,” he continued.

In summary, the man said he will support his grandson in any way that he can, now and in the future.

“I hope to have ongoing positive involvement with his rehabilitation and development,” he concluded.