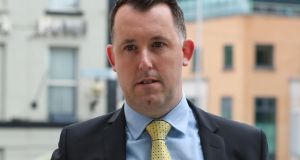 Det Garda Donal Daly gave evidence about a copybook with details of a satanic pledge being found in a bedroom of one of the boys accused of murdering Ana Kriégel (14). Photograph: Collins Courts. 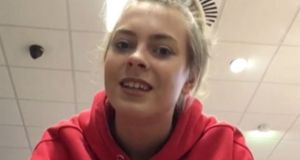 A copybook detailing a “satanic pledge” and containing the names of the two teenagers accused of murdering Ana Kriégel was found in the bedroom of one of the boys, the Central Criminal Court has heard.

The jury in the trial of the two 14-year-olds trial was given copies of the document, which was recovered from the house of Boy B.

Det Garda Donal Daly agreed with prosecuting counsel Brendan Grehan SC that a number of shapes were drawn in the copybook, including what looked like a five-pointed star comprised of two triangles. Counsel said this “might be called a pentagram.”

The words “Satanic Pledge” were written on one page.

Written on another page was: “A volcano is a rupture in the crust of earth. Allows hot lava and gases to escape.”

On the next page were seven names including those of Boy B and his co-accused Boy A. There were various symbols next to each name.

The book also contained a set of rules including “Don’t talk about it” and “only pledge hosts can give pledges”. The other rules were “act normal like nothing happened” and “no talking about Jesus or God, only Satan”.

The copybook was mentioned by Boy B during his garda interview. He said it contained details of a club he had set up. He called it a “satanic cult” because he did not want certain people to join, he said. “Since I called it the satanist cult there were cult rules.” He said the rules were just for fun and were not meant to be serious.

Det Gda Daly was cross-examined on Wednesday on the number of breaks Boy B received during the interview process.

Counsel for the boy, Damien Colgan SC, asked him what arrangements had been made for Boy B to have regular breaks. Det Gda Daly responded his job was to interview the boy. He said his welfare was the responsibility of the member in charge of the garda station.

Det Gda Daly said they were “very cognisant we were dealing with a juvenile.”

He agreed with counsel Boy B’s mother said at one point there was not much air in the interview room and he responded “unfortunately we have to make do with this facility.”

“She was complaining about the facilities?” counsel asked. Det Gda Daly said she was “highlighting” them.

He agreed that during the third interview, which last for two hours and nine minutes, there was one three-minute toilet break.

Mr Colgan put it to the detective that he refused to let the boy consult with his solicitor at one point when he appeared to be getting stressed. The witness responded that the boy said he was alright to continue.

“What was wrong with stopping it there not 10 minutes later and letting him have a conversation with his solicitor?” Mr Colgan asked.

“We were at a crucial point at that stage. All I wanted was to give Boy B a chance to tell the truth and a chance to establish the truth.”

The prosecution allege Boy B lured Ana (14) from her home at 5pm on May 14th, 2018 on the pretence of meeting Boy A, who Ana was “interested” in. Boy A then allegedly violently sexually assaulted and murdered her in the derelict farmhouse as Boy B watched.

The trial continues before Mr Justice Paul McDermott and a jury of eight men and four women.