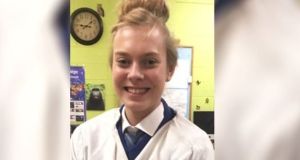 Ana Kriegel was murdered in an abandoned house at Laraghcon, Clonee Road, Lucan, on May 14th, 2018.

The two boys convicted of the murder of 14-year-old Ana Kriégel will be sentenced next Tuesday.

On Tuesday the Central Criminal Court heard a summary of the evidence against the boys as well as an emotional victim impact statement from Ana’s mother in which she called Ana the “love of our lives.”

“Thank you for giving us all of your precious love. We miss you, we love you, no one can ever take that away from us,” Geraldine Kriégel told the court.

Mr Justice Paul McDermott said he would pass sentence on November 5th, and remanded the two accused in continuing custody.

Earlier the sentencing hearing was told the boy convicted of the murder and violent sexual assault of Ana has accepted he had caused the death of the 14-year- old girl two years ago.

The 15-year-old boy, known publicly as Boy A, has told various professionals since his conviction last June, that he inflicted various injuries to Ana in a disused farmhouse in Leixlip, Co Kildare.

However, he continues to deny sexually assaulting her.

On Tuesday morning a sentencing hearing at the Central Criminal Court heard Boy A has offered “an alternative explanation” as to how his semen got on Ana’s ripped top which was found near her body.

Prosecuting counsel Brendan Grehan SC did not go into the details of this explanation.

He said Boy A described to professionals in Oberstown Child Detention Campus “various actions” he performed. These include “headlock, chokehold, kicking and hitting her with a stick.”

He said he also threw a block at her or hit her with it three times. A concrete block and wooden stick, both with extensive blood staining were both found near Ana’s body.

Detective Inspector agreed with counsel that many questions remain outstanding about how and why Ana died.

The court heard Boy A’s co-accused, Boy B, who was convicted of Ana’s murder continues to deny playing any role in Ana’s death.

Counsel said he has maintained the position he laid out in his various Garda statements, that he saw Boy A attack Ana before he ran away.

The two boys were 13-years-old when they murdered Ana in Glenwood House at Laraghcon, Clonee Road, Lucan on May 14th, 2018.

They were convicted by unanimous jury verdicts in June following a seven week trial. Boy A was also convicted of Ana’s aggravated sexual assault in a manner that involved serious violence to her.

Sentencing had been adjourned until Tuesday for the preparation of psychiatric reports on the boys.

Detective Inspector Mark O’Neill, who acted as Senior Investigation Officer during the murder inquiry, agreed with counsel that many questions remain outstanding about how and why Ana died.

It is not known how much discussion there was between the boys about killing Ana that day, he said.

There is dispute about whose idea it was to meet Ana that day and who decided Boy B should call to her house.

It is not known who decided they should all meet at Glenwood house or who brought various items to the house, including the tape which was found wrapped around Ana’s neck.

Counsel said we also do not know who smashed Ana’s phone when it started to ring.