Boot print on schoolgirl’s hoodie was ‘similar’ to pattern of boots worn by Boy A, trial hears 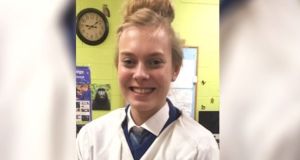 Boy A has pleaded not guilty to the murder and sexual assault “involving serious violence” of Ana Kriégel on May 14th, 2018

Ana Kriégel’s blood was found on a homemade mask seized from the home of a boy accused of her murder and violent sexual assault, a trial has heard.

Gardaí searched the home of Boy A on May 24th, a week after Ana’s body was found in an abandoned farmhouse. They seized 59 items including a large amount of electronic devices.

The court heard a backpack containing several items was found in the wardrobe of Boy A’s room.

The bag contained kneepads, shin guards, a pair of gloves, a snood and a homemade mask.

John Hoade of Forensic Science Ireland told Brendan Grehan SC prosecuting, that he received the items on June 11th, 2018, and examined them.

He agreed with counsel that the mask covers half the face down to the mouth. It has holes for the eyes and nose and what appeared to be simulated blood on the upper teeth. There was blood staining on the inside and outside of the mask. Both these stains matched Ana’s blood profile.

Her blood was also found inside and outside the backpack and on the gloves and knee-pads, Mr Hoade said.

The shin guards were of the type a footballer would wear and the kneepads were like those worn by a tradesman or roller-skater, Mr Hoade agreed. The snood is an open-ended piece of fabric which goes around the neck instead of a scarf, he said.

There was no blood found on the shin guards.

It is the prosecution’s case that Boy B lured Ana from her home at 5pm on May 14th, 2018, on the pretence of meeting Boy A, who Ana was “interested” in.

Boy A then allegedly violently sexually assaulted and murdered her in the derelict farmhouse in Lucan as Boy B watched, the prosecution claims.

On Thursday afternoon, the trial heard that a boot print found on the hoodie of Ana Kriégel was “similar” to the pattern of the boots worn by Boy A.

Dr Bríd Martina McBride of Forensic Science Ireland told the trial that she examined a piece of fabric from the hoodie Ana was wearing. She also examined the footwear worn by the two boys.

None of the impressions taken from the crime scene matched the footwear worn by Boy B, the court heard.

Earlier on Thursday the trial heard data from a phone belonging to Boy A contained search engine references to “abandoned places in Lucan” and “the 15 most gruesome torture methods in history”.

This evidence was put to Boy A during interview after he was arrested on May 24th, 2018.

Detective Garda Thomas Doyle told prosecuting counsel Gerardine Small that Boy A was interviewed a number of times after his arrest on May 24th. In one of the interviews gardaí showed the boy a number of screenshots of search results which he said had been taken from the boy’s phone.

One of the screenshots showed a result for “15 most gruesome torture methods in history”. Other results included “horror movies that will blow everyone away”, “Ouija Board in haunted Asylum (warning)”, “Until Dawn, get Jessica’s clothes off” and “sexiest video games characters of 2017”.

Detective Garda Marcus Roantree told the boy he was “particularly interested” in the torture methods result. He said it was accessed on February 14th, 2018.

The boy’s father, who was present during all interviews, told gardaí his son was interested in aliens and “creative creatures”.

Garda Doyle also read from another list of items downloaded from Boy A’s phone including “abandoned places in Lucan”.

Gardaí explained to the boy that an expert was able to retrieve data from the Safari search engine on his phone. When they showed him the printout he said: “That’s not possible as I don’t have Safari on my phone.”

Gardaí restated that it was an expert who examined the phone and Boy A replied: “I don’t have Safari on my phone so I don’t know how.”

Gardaí then showed the boy a photograph of blue Tescon tape which they said they had seized from Boy B’s home. Boy A denied ever having been in possession of tape such as that and denied that Boy B gave him similar tape. Gardaí further explained to him that the tape would be examined and compared with the tape that was found around Ana’s neck.

Garda Doyle then told the boy that this was his opportunity and added: “Something went on that day that is going to affect you for the rest of your life. Is there anything you want to say?” Boy A shook his head indicating “no”, the witness said.

In the boy’s final interview, gardaí read to him part of a statement that had been given by Boy B in a different Garda station on the same day. At the end of the interview gardaí asked Boy A if there were any additions or clarifications he would like to make.

The trial at the Central Criminal Court continues on Monday before Mr Justice Paul McDermott and a jury of eight men and four women.