Ana Kriégel murder: Boys will be aged 27 and 23 at earliest release dates 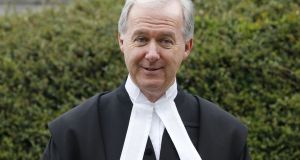 Mr Justice Paul McDermott said there was little guidance for the sentencing of children for murder because “thankfully” so few cases have come before the courts. File image: Collins Courts

In a judgment which took almost two hours to read out, Mr Justice Paul McDermott laid out in forensic detail, the reasoning behind the sentences handed down to Boy A and Boy B for the murder of Ana Kriégel.

Boy A, who was convicted of physically taking Ana’s life as part of a pre-planned attack was sentenced to life, a sentence which will be reviewed after he spends 12 years in detention and prison. The review process will begin before the court in January 2029, a year before his earliest possible release date.

When the review process concludes it will be open to the judge to suspend some or all of the balance of the sentence with specific conditions attached.

The boy was also sentenced to 12 years for the aggravated sexual assault of Ana. This will run alongside the life term, meaning it won’t add to his sentence.

His co-accused Boy B, was convicted of luring Ana to the derelict farmhouse near her home on the pretence of meeting Boy A who she had a teenage crush on. There is no evidence Boy B took part in the physical attack but he knew she was going to be killed that day, the judge said.

Boy B was sentenced to 15 years. This will be reviewed after eight years and the review process will start before the court in early 2025.

At their earliest possible release dates Boy A will be 27 and Boy B will be 23.

The teens, who are now 15 years old, were 13 when they murdered Ana in Glenwood House at Laraghcon, Clonee Road, Lucan on May 14th, 2018.

Addressing the boys directly, Mr Justice McDermott told them they will have to serve long periods of detention but will one day have the opportunity to return to their families and communities “when you are still relatively young men”.

“When that will be is not yet determined but much is based on you behaviour and attitude during your detention.”

Addressing Boy A, the judge said he took Ana’s life and subjected her to a terrifying assault. He told Boy B he “actively and knowingly” took part in her killing.

“You will have to carry the guilt and shame of your involvement for the rest of your lives,

“Her family will have to bear their grief for the rest of their lives. At least you will have the opportunity to reconstruct yours in a positive way.”

“You will have to carry the guilt and shame of your involvement for the rest of your lives.

“Her family will have to bear their grief tor the rest of their lives. At least you will have the opportunity to reconstruct yours in a positive way.

“Will you take it?

“You have the opportunity for a future and second chance, something you so wrongfully and cruelly denied to Ana.”

Mr Justice McDermott said Ana’s life was of “supreme importance” and that her family will suffer her loss for the rest of their lives. He said she was a healthy young girl who had her whole life before her and that her short life should not be defined by this crime.

She lived her life “with energy, fun, imagination, love, dancing and music”.

The judge said there was little guidance for the sentencing of children for murder because “thankfully” so few cases have come before the courts.

He noted he could impose a life term but that it was not mandatory in the case of minors. He also noted he does not have the power to impose a partly suspended sentence.

The judge said he also has the power to impose a custodial sentence which can be reviewed in a specific number of years. In the case of children custodial sentences should be imposed “as a last resort”, he said.

He said the age of a youth offender provides a substantial degree of mitigation, even in the most serious of cases.

During the trial, Boy A maintained his position that he was never in the derelict house with Ana and that he last saw her in the park after the two had a talk.

The judge noted Boy A now admits causing Ana’s death through assaulting her but claims it was not intentional. He continues to deny aggravated sexual assault and claims he had a consensual sexual encounter with the victim. The judge noted this account is not supported by the evidence which included Ana’s ripped clothes found scattered around the room.

The boy has the support of a close and loving family who were shocked and appalled by the crime, the judge said.

Reports prepared for the court show no evidence of mental illness or character traits linked to violence. The boy has demonstrated some regret and remorse but Mr Justice McDermott said he is not satisfied the teen fully understands the seriousness and impact of his offence and the hurt it caused to Ana’s family.

It also impacted the boy’s own family who have been subjected to public abuse since the verdict. “This abuse is wrong and should stop.”

The judge said the aggravating factors in the case included the extreme youth of the victim, the planning that went into the murder, its callous and prolonged nature and the lies Boy A told afterwards.

He also noted Boy A never sought to help Ana afterwards or relieve her parents distress by telling gardaí where she was located.

The psychological and psychiatric reports state there is nothing in Boy A’s personality to suggest he is a high risk offender. There is no previous evidence of anti-social behaviour, an inability to keep rules or a distorted view of sexuality, the judge noted. There is also no evidence of callous or unemotional personality traits or of low empathy.

However a psychosexual analysis was compromised by the boy’s response style, one report noted. When describing the offence the boy relayed visual details but emotional or motivational details were absent.

The boy said he did not know or could not remember his motivation for the offence.

Conviction and incarceration may increase the boy’s risk profile, the judge noted. He said there is a lot of work to do to bring the boy to a full realisation of his offending.

Regarding Boy B, there is also no evidence of a mental disorder either now or at the time of the offence.

The boy refuses to accept the verdict of the jury. He claims he did not know Boy A was planning to kill Ana when he brought her to the house. However he says he feels guilty for not helping her as she was being attacked by Boy A.

Experts who interviewed Boy B found he is at low risk of repeating the crime but said there should be a repeat assessment in the future. The reports state the boy would benefit from “victim empathy work”.

The judge said in sentencing the boys, he must have regard to their young age and the fact that their personalities and understandings of the offence are likely to develop significantly as they mature.

The review periods will allow a judge at a later stage to consider this development and tailor the remainder of their sentences accordingly, Mr Justice McDermott said.

Ana’s murder had an effect on people around the country because of her age, her personality and her personal story, the judge said. It was a murder of the most “serious, disturbing and shocking type”.

Mr Justice McDermott said he had considered whether he should strip the two boys of their anonymity in light of the conviction. He said he has decided against doing so as it would be detrimental to their rehabilitation.

It would also likely exacerbate the abuse received by their families, he said. The boys will remain anonymous and this order will continue past their 18th birthday, the judge said, unless it is altered by another court.