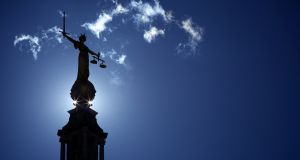 The court heard Duran was afraid of being arrested on the bench warrant because he believed he would be deported back to Turkey to face the prison sentence there. Photograph: iStock

An alleged international drug trafficker has received a nine year prison sentence after he was caught holding nearly €1 million worth of heroin.

Ali Adnan Duran (52) was convicted of trafficking 59 kilos of heroin in a Turkish court in January 2016 and received a 12 and a half year prison sentence. He left Turkey and went to live in The Netherlands for three years before arriving in Ireland.

Giving evidence at Dublin Circuit Criminal Court Detective Garda Lorraine Brennan said that in August 2019 gardaí­ were carrying out surveillance of a car which travelled to a bed and breakfast on Mill Road, Rathcoole, Co. Dublin.

Duran and another man were both living at this address and they got into the car, which gardaí then stopped and searched. Duran gave gardaí a false name and a Dutch address.

Gardai later established Duran’s real identity and the fact that he had a bench warrant out for his arrest on another matter. Gardaí returned to his home to arrest him and to carry out a search of the address.

They found heroin in compressed bags in a suitcase in Duran’s room. Dt Gda Brennan said the estimated street value of the drugs found was some €961,000.

Duran, of no fixed abode, pleaded guilty to possession for sale or supply of heroin at Mill Road, Rathcoole on August 31st, 2019.

In interview Duran told gardaí he had protested when his housemate said he was storing the drugs in the bedroom but his housemate threatened to tell gardaí where Duran was living.

Paddy McGrath SC, defending, said that Duran was afraid of being arrested on the bench warrant because he believed he would be deported back to Turkey to face the prison sentence there.

She told the court that gardaí believe he is “an international drug trafficker” and that there are other convictions. Mr McGrath said such evidence was “completely out of order” and Judge Nolan ordered that Ms Leech not to present any evidence to the court that could not be proved. He backdated a prison term of nine years to last August.