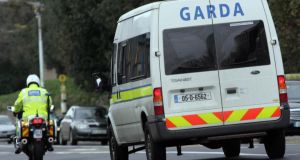 The High Court this afternoon ordered the gardaí to apprehend a 16-year-old boy who had absconded from hospital, bring him back and remain with him until a brain scan is carried out on him.

Barrister Felix McEnroy, SC, counsel for the HSE’s Child and Family Agency, told Mr Justice Kevin Cross that the boy was at the high end of disturbed children and had previously suffered a brain injury.

He had undergone a surgical operation and had suffered a very worrying deterioration of his condition. While in care detention he had started dropping cups, suffering headaches and had developed a problem with his speech and memory.

Mr McEnroy said the boy had been brought back to hospital where, following observation, he had undergone a brain scan and medical assessment. He had absconded twice from the hospital today and while he had been apprehended the first time he was now still missing.

The boy had a history of absconding from care and had been detained in a care facility in Co Dublin.

Mr McEnroy said gardaí believed they were in a position to apprehend him quickly again and the agency was seeking a court order directing them to return the boy to hospital and remain with him while undergoing a new brain scan there.

He said the gardaí, the child’s guardian and his mother were consenting to this but the Acting Garda Commissioner required a court order for gardaí to remain with the boy in hospital.

Mr McEnroy said the child required to be treated with a special dye during a new brain scan assist experts decide if he had suffered a brain bleed.

Judge Cross directed that the gardai apprehend the boy and accompany and transport him to hospital for treatment and to remain throughout his treatment and to later transfer him back to the care facility.