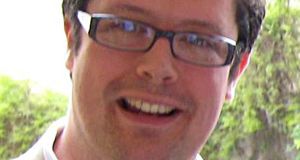 The family of Tom O’Gorman (above), who was killed by his tenant Saverio Bellante, from Italy, are seeking a “full ventilation” of the manner of his death through the inquest process. File photograph: The Irish Times

The inquest into the death of a Dublin man violently killed by his housemate will be a “very delicate case for all involved”, a court hearing heard.

The family of Tom O’Gorman (39), who was killed by his tenant Saverio Bellante, from Italy, are seeking a “full ventilation” of the manner of his death through the inquest process.

Mr O’Gorman, a journalist and researcher at the Iona Institute, died as a result of blunt force trauma to the head and stab wounds to the chest at his home in Beech Park Avenue, Castleknock, Dublin 15, in January 2014.

Acting for the family at Dublin Coroner’s Court, barrister Aisling Mulligan said she had made submissions in relation to the scope of material to be examined at the inquest hearing.

“The extent to which the inquest will be opened will need to be quite broad,” Ms Mulligan said.

The inquest into his death was opened on March 26th, 2014, and adjourned to allow for an investigation and subsequent trial at the Central Criminal Court. Last February, the family applied for a full inquest to be held through their legal team.

Not present in court

The O’Gorman family was not present in court for this latest short hearing but were aware of the proceedings, Ms Mulligan told Coroner Dr Brian Farrell.

They have grave concerns about Mr Bellante’s psychiatric treatment and the “dangers” attached to it in the lead-up to the killing. The family feel this was not fully ventilated at Mr Bellante’s trial.

Preparation is under way for the material format of the hearing, including which witnesses will be called. “It’s a very delicate case for all purposes and for family and the people involved,” Ms Mulligan said.

Mr Bellante was found not guilty by reason of insanity at the Central Criminal Court, but large elements of the case were “not ventilated because of the type of case that was run”, Ms Mulligan said.

The O’Gorman family hopes to have the full circumstances of Mr Bellante’s psychiatric treatment and its connection to the killing of Mr O’Gorman aired in court.

Additional submissions will be made to the coroner’s office in the coming weeks and the inquest was adjourned for further mention until May 13th.