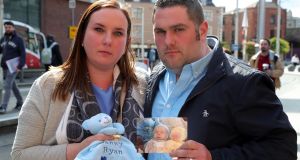 The parents of a baby boy who died four days after birth say they take comfort from new guidelines introduced following his death.

First time mother Brenda Ryan said she felt her pleas for help during the onset of labour were ‘brushed away’.

“Danny was our beautiful much longed-for son and our first grandchild on my side of the family.

“I was repeatedly told I could not be in labour, this resulted in being abandoned in a bath for over an hour.

“After a traumatic birth by emergency C-section we got to spend four days with Danny.

It was only in the last few hours that we got to hold and cuddle him in the way that he deserved,” Brenda Ryan said in a statement after the inquest.

Mrs Ryan developed gestational diabetes during pregnancy and had scans at 28, 32 and 36 weeks.

“The baby was growing consistently, we didn’t have any concern about baby’s growth,” Consultant Obstetrician and Gynecologist at Our Lady of Lourdes Hospital Drogheda, Dr Vineta Ciprike said. Coroner Dr Myra Cullinane noted that there was no formal ultrasound performed between 36 weeks and the baby’s birth at 40 weeks and nine days gestation.

Dublin Coroner’s Court heard that Mrs Ryan was induced in hospital in Drogheda on October 15th but this was unsuccessful. The next day a gel was applied in a bid to soften the cervix. Mrs Ryan described feeling pains around 4pm and at 8.30pm she felt her waters had broken but she was confused and distressed.

Midwife Ciara Judge told the court she had no clinical concerns for Mrs Ryan at this time. “She was starting to have tightenings, I certainly didn’t think she was in labour,” the midwife said.

Mrs Ryan was invited to have a bath to ease the pain. “We remained in the bath for a long time. I was still in pain. The bath water went cold twice during this time,” Mrs Ryan said.

After 11pm the midwife returned and instructed Mrs Ryan to return to the ward for examination. At 11.40pm a CTG revealed the baby’s heartbeat was low and Mrs Ryan was rushed to theatre for an emergency C-section. Baby Danny was born at 11.56pm. He was not breathing.

He was transferred to the Rotunda Hospital where he died four days later on October 20th.

Pathologist Dr Emma Doyle gave the cause of death as severe brain damage due to placental failure as a consequence of foetal vascular malperfusion.

Dr Doyle said an acute event occurred “in or around the day of the baby’s delivery”.

New guidelines have been introduced since baby Danny’s death, specifying that in cases of mothers with gestational diabetes, induction must take place by forty weeks plus four days, with the aim of delivery within two days of induction.

Endorsing the new guidelines, the coroner returned a narrative verdict and recommended a review of the ultrasound reporting system to optimise the accuracy of foetal growth and placental function assessment.

The Ryans said the new guidelines provided some comfort to them.

“We will endeavour to pay tribute to our Danny’s memory and his short life by continually pushing for improvements to maternity care, he deserves it,” Mrs Ryan said.