Gardaí send file to DPP over Carrickmines fire which killed 10 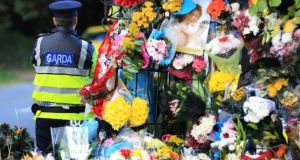 The scene at the site of the fire that claimed 10 lives in Carrickmines in 2015. Photograph: Nick Bradshaw

Gardaí have submitted a file to the Director of Public Prosecutions (DPP) concerning a fire in Carrickmines, Dublin 24 in which ten people and an unborn baby died.

Five adults and five children died in the blaze at Glenamuck Halting site in the early hours of October 10th 2015.

The ten victims died due to carbon monoxide poisoning from smoke inhalation because of a fire, an inquest into their deaths previously heard.

At a resumed inquest into the ten deaths at Dublin Coroner’s Court, Inspector Tom Condon of Dun Laoghaire Garda station said an investigation file has been completed and sent to the DPP’s office.

“The investigation file is currently with the DPP and we are seeking a six month adjournment,” Insp Condon said.

In a statement, the council told The Irish Times it was aware that there had been an investigation by the Garda into the fatal fire and that a file was complete and had been sent to the DPP.

“In light of the ongoing Coroners inquest and the Garda processes it would be inappropriate for the the Council to make any further comment.”

The victims were Thomas Connors (27), his wife Sylvia (30) and their children Jim (5), Christy (3) and six-month-old Mary; Willie Lynch (25), his partner 27-year-old Tara Gilbert, who was pregnant, and their daughters Jodie (9) and Kelsey (4) and Jimmy Lynch (39), a brother of Willy. They were residents of Glenamuck Halting site, Carrickmines, Dublin 24.

There were no family members present in court as Coroner Dr Myra Cullinane granted an adjournment of the inquest for further mention on March 22nd 2018.