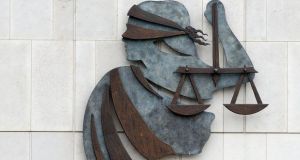 A 35-year-old woman, who alleged she had been assaulted by security men repossessing her family’s business for a bank, has lost a damages claim for personal injuries against KTech Security. *

Judge Sarah Berkeley also awarded costs against Bernadette McLoughlin, of Dodderbrook Park, Ballycullen, Dublin 24 after telling her she had attempted to force her way into a shopping mall at Mary Street, Dublin, when she found it had been taken over on behalf of a receiver.

McLoughlin alleged she had suffered psychological injuries as well as bruising and pain after her left arm had been trapped in an entrance door for half an hour by security staff who would neither let her in or out once her arm had become lodged between the door and a wall.

She told barrister Paul O’Neill, counsel for KTech, of Cookstown, Tallaght, that she had known of a possession order having been made against her mother, who owned the premises, and she had received a call from a tenant who had been locked out once the city sheriff had moved in.

McLoughlin denied she had been part of a threatening and menacing crowd outside the mall on January 12th, 2016 and said she had only wished to assist tenants recover equipment. She said security men had trapped her between the door and the wall and would not release her.

Mr O’Neill, who appeared with BLM Solicitors for KTech, said security staff would tell the Circuit Civil Court that she had held on to a security rail at the entrance and had refused to move out of the partly closed doorway.

Jamie McLoughlin, her brother, said the family was aware a High Court order for possession had been delivered to the city sheriff but no-one had known when it would be executed. He said repayments had not been made on a mortgage for 16 years and he had used rents from tenants to defray other bills.

Judge Berkeley said she accepted the evidence of Garda Sgt Fintan Corcoran who had visited the scene and had told the court Ms McLoughlin could have walked free at any time. He had to counsel her for 10 minutes before she agreed to move out of the position she had been standing in. He had specifically told the court there had been plenty of room either side of her arm in order to allow her release.

“When told she wasn’t going to get access she manoeuvred her way into a position in the doorway and I don’t accept she was caught and unable to get out,” Judge Berkeley said.

Judge Berkeley said she did not accept that the defendant had done anything that had caused bruising to Ms McLoughlin’s arm. Security staff had done everything they could not to let her in and not to harm her either.

Retired city sheriff James Barry told the court it would have been very dangerous for him to have given any notice of the date of taking possession. There were seven security personnel as well as two bailiffs with him in the premises at the time.