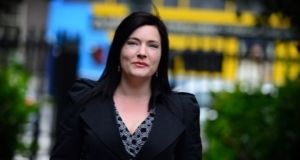 Rachel Moran had appeared on RTÉ’s Late Late Show with Ryan Tubridy last year during which she had outlined her memoirs of her prostitution. Photograph: Bryan O’Brien

A former prostitute, who defamed another ex-sex worker by claiming she had never “worked” certain Dublin streets, has been told by a judge not to post any such similar statements online again.

Barrister Andrew Walker, counsel for Ms Moran, had told the court that Ms Moran had been left in a state of distress following online allegations by Ms Dalton that Moran was “a fraud and a liar.”

Mr Walker, who appeared with solicitor Dermot McClean of Lavelle Partners, said Ms Dalton had alleged online that Ms Moran had never worked Dublin’s Waterloo Road and Burlington Road as a prostitute in the 90s.

Judge O’ Connor today toldMs Dalton that if she did not refrain from posting these statements against Ms Moran online, it would lead to an injunction being granted against her, which, he had said, was a very serious matter.

He said Ms Dalton had been questioning Ms Moran’s integrity by saying claims Ms Moran had made while recounting her time as a prostitute, including her 2013 memoir titled Paid For: My Journey Through Prostitution had not been entirely true.

Judge O’ Connor told Ms Dalton she had been confusing opinion from fact in her allegations. He said it had been acceptable for Ms Dalton to say that she had never seen Ms Moran on Waterloo Road and Burlington Road but to claim she had not been there at all had been defamatory.

The Judge said Ms Moran would not be entitled to bring any further action or damages claim against Ms Dalton in the future.

The Judge heard that Ms Moran had appeared on RTÉ’s Late Late Show with Ryan Tubridy last year during which she had outlined her memoirs of her prostitution and how she had managed to get off the streets. Her story had also been highlighted widely throughout the print media and on radio and she published a number of articles recounting her time as a teenage sex worker.

Ms Moran had alleged that Ms Dalton had published defamatory blog posts and a number of tweets in which she unlawfully accused Ms Moran of scamming money from recounting her experiences as well as harming sex workers for profit.

The court had heard that in one tweet Ms Dalton had stated about Ms Moran: “She is a liar, a b***h and a bully and she was never even a sex worker.” Another had stated: “She makes a good living out of free travel and loads of attention out of bullying and persecuting sex workers and that is all she is capable of caring about. The fact that innocent women are seeing their lives destroyed by her isn’t even on her radar.”

Mr Walker had told the court that Ms Dalton had caused Ms Moran a great deal of upset and distress and she was the only one querying Ms Moran’s account of her experiences, displaying antagonism and maybe jealousy towards Ms Moran

Ms Dalton, who represented herself in court, had told Judge O’ Connor that she found it impossible to believe that Ms Moran had ever worked on Waterloo Road or Burlington Road between 1991-1993. She herself had been working there during those years and she had never encountered Ms Moran or anyone that could have been Ms Moran.

Ms Dalton had told Judge O’ Connor she accepted that her allegations that Ms Moran had never worked in the sex industry had been wrong but she had not been able to admit that Ms Moran had, as she claimed, worked Waterloo Road and Burlington Road.

Judge O Connor said on Monday , after having accepted that Ms Moran had worked as a prostitute during the 90s, Ms Dalton had begun looking at trivial matters, such as the particular streets Ms Moran had claimed to have been situated on.

The Judge said there had been an issue relating to Ms Moran’s legal costs due to alleged crowdfunding by Ms Moran to cover her legal fees. He said he would deal with the ultimate issue of costs at a later date