Judge considers sentence of man convicted of taking €18,000 from Children to Lapland Appeal 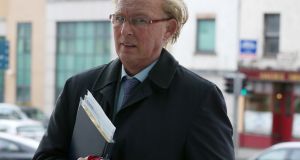 The court heard John Murphy (66) was involved with a new charity, The Make It Happen Foundation, which sends terminally ill children on trips away. Photograph: Collins Courts.

A travel agent convicted of stealing from a charity he founded for terminally ill children may avoid a prison sentence if he can repay the stolen money.

John, also known as Con, Murphy (66) of Church Road, Killiney, Dublin was convicted at Dublin Circuit Criminal Court last week after a two day trial and 42 minutes of jury deliberation. He claimed the charity, The Children to Lapland Appeal, owed him €68,000 at the time.

The charity was founded by Murphy in 1987. It raised money from donations to bring terminally ill children on trips to see Santa Claus in Lapland. Murphy also operated United Travel, a travel agents based in Stillorgan before it went out of business in 2012.

Murphy had pleaded not guilty to four counts of theft between June and July 2010 in the Dublin area totalling €18,643.

At a sentencing hearing on Monday the court heard Murphy’s family were willing to raise compensation on his behalf. The Children to Lapland Appeal has since been liquidated but Judge Patrick McCartan asked that enquiries be made about other suitable charities which may need the money.

Judge McCartan said that the money “will be a significant factor in enabling me to take an attitude towards him that otherwise I may not be able to take.”

He said any sentence must be “a deterrent to other people in the accused’s position that such mean spirited offences will be meet with custodial imprisonment.”

However the judge said he would consider a defence application for a non-custodial sentence if the money was produced by March 16th.

The court also heard Murphy was now involved with a new charity, The Make It Happen Foundation, which also sends terminally ill children on trips away. As part of his bail conditions he was required to tell the directors of the foundation of the theft charges.

However when gardaí­ made enquires with the foundation’s directors they said they were directors in name only and that Murphy effectively ran the charity.

Garda Brian Daveron told Garrett McCormack BL, prosecuting, he began investigating the Children to Lapland Appeal after a complaint about how it was being run. He obtained court orders for access to the charity’s account and Murphy’s personal accounts.

He discovered four cheques had been written from the charity’s account and lodged in Murphy’s personal account.

During the trial Murphy’s defence counsel claimed that the charity owed him money and it was normal for money to travel back and forth between the accounts. The prosecution characterised this position as The Father Ted defence. “To quote Dermot Morgan, they’re trying to say ‘the money was simply resting in my account,” Mr McCormack said.

In mitigation Patrick Reynolds BL, defending, said his client was diagnosed with bladder cancer in 2010. Murphy currently lives with his sister who is also in bad health.

Mr Reynolds said it was not a sophisticated or covert crime. He also pointed out that some money went back from Murphy’s account into the charity’s account after the €18,000 was stolen.