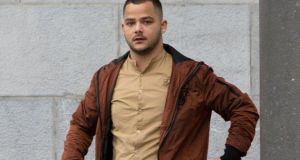 A Co Clare teenage girl only realised that she had been the victim of a sex assault when sent a video clip via Facebook of the assault the following day, a court has heard.

At Ennis Circuit Court on Thursday, Det Garda Conor Flaherty said the then 18-year-old was sent the 50-60 second clip by a male friend who had videoed the assault.

Father-of-two, Rene Miko (22) formerly of Place de Plouzane, Kilrush, Co Clare has pleaded guilty to the sexual assault of the teenager at a house on October 9th/10th 2015.

Miko, who was born in Slovakia, is currently serving four years in jail for dangerous driving causing the death of GAA coach Eugene McNamara (42) on October 26th, 2016.

In court on Thursday, Det Flaherty said Miko, the teenage girl and other friends had gone to a party at a friend’s house in Corofin.

He said the complainant “doesn’t remember anything from the night”.

The general thrust of statements by two of the injured party’s female friends was that she was “very, very drunk and that she had fallen on the floor of the house and was vomiting”, he said.

Det Flaherty said the two put their friend to bed at around 1am and she had her clothes on. On October 11th, the injured party received a video of the sex assault from a male friend via Facebook messenger, the court was told. It showed Mr Miko engaged in a sexual act with the injured party” on the bed where she had gone to sleep.

Counsel for the State, Lorcan Connolly BL said the evidence from the complainant’s two female friends clearly established that the injured party was incapable of any consent to any sexual act.

The complainant was not in court on Thursday but in her victim impact statement read into the record, the woman stated: “I lost out on my youth over this. Life has been very difficult.”

She added: “I lost all my trust in people after the ones I trusted the most took that away from me.”

She also said after Miko’s guilty plea she could “now move on with my life and that justice was done for what happened to me”.

Counsel for Miko, Mark Nicholas SC said his client “very much regrets that an evening that started off with such fun could have had this aspect to it”.

Mr Nicholas said the case “doesn’t have the ingredients and nastiness that other sex assault cases can often have of predatory behaviour or a sober person taking advantage of an intoxicated person”. He said the people at the party were long-term friends. It wasn’t the most straight-forward matter “and lines and judgement became blurred”, he said.

He said Miko and his friends were contaminated by alcohol on the night and “something occurred that should not have occurred if people had been of sober minds”. He also said “it wasn’t a situation where Mr Miko was waiting in the corner silently and sinisterly waiting for someone to get drunk and to take advantage. This was an evolving situation”.

The injured party was “wronged”, Mr Nicholas said, and Miko is full of upset and remorse over what occurred.

Judge Gerald Keys said he would impose sentence on on March 4th.