Suspended sentence given to woman at Dublin Circuit Criminal Court 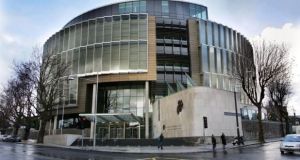 The Criminal Courts of Justice in Dublin.

A woman who caught her husband engaged in sexual activity with her 16-year-old daughter and put them both out of the home has been given a suspended sentence for the reckless endangerment of her child.

The man has been charged with multiple counts of “defiling” a child and his case is still before the courts.

The man, who was the teenage girl’s stepfather, brought her to a number of Dublin city centre hostels after they were ejected from their home, leading to concerned staff contacting gardaí.

When the man and girl were eventually tracked down, gardaí­ called the mother who told them she was not concerned about the two of them being together in a hostel. She also failed to tell them that she was aware the man was engaging in sexual activity with the girl.

The woman (39), who cannot be named for legal reasons, pleaded guilty to one count of reckless endangerment of a child at Dublin Circuit Criminal Court. She has no previous convictions.

Sentencing her on Friday, Judge Martin Nolan said the woman “didn’t protect the interests of her child”.

“All parents have an obligation to mind our children and protect our children,” he said. “...She should have protected and minded her child.”

The judge said the woman should have got the man out of the house but kept her daughter with her and informed the authorities of the allegations against him.

However, the judge accepted the woman was under severe emotional pressure at the time, having just found out her husband was engaging in sexual activity with her teenage daughter.

The victim in the case, who is now 18, was signed into the care of Tusla with her mother’s consent and is living with a foster family. She was in court for the sentence and a victim impact statement was handed into court, but not read out.

Detective Garda Brendan Casey told Sinead McMullan BL, prosecuting, that the girl grew up with her mother’s family and came to live with her mother in 2016 when she was 14.

The court heard that the man initially had a normal father-daughter relationship with the girl, but in February 2018 when she was just 16, he started engaged in sexual activity with her.

“She thought she loved him,” Ms McMullan told the court. “She was a child at the time, but it was in her view consensual.”

Over a two-month period, the man slept with the girl on about 10 occasions, the court heard. At the time, his wife was pregnant with a baby who had a fatal foetal abnormality.

In April 2018, the woman walked into the sitting room to find the man engaged in sexual activity with her daughter. There was an altercation and the man left the house.

The following day, the woman put both the man and her daughter out of the house and they spent the next few nights in various hostels in Dublin city centre.

Staff at a number of these hostels were concerned about the behaviour of the man towards the girl and contacted gardaí, who spent the next three days trying to locate them.

When they found the man and girl, the stepfather told them the girl was his stepdaughter and her mother knew where they were. When gardaí­ rang the mother, she said she was aware her daughter was staying with the man in a hostel and she had no concerns for her safety.

“At no stage did she disclose there was an ongoing sexual relationship,” Det Gda Casey said.

As a result of this conversation, gardaí were satisfied and left the hostel. However, they were contacted again early the next morning by hostel staff who saw the man and girl sleeping in the same bed.

Gardaí decided there was an immediate serious risk to the welfare of the child and she was taken into care. The man was arrested.

When questioned by gardaí, the woman told them everything that had happened over the previous days.

She was extremely cooperative with gardaí­, Gerardine Small BL, defending the woman, told the court.

“This is a woman labouring under extreme emotional pressure,” she said. “We have betrayal, confusion, all of these emotions.”

The woman’s baby was born with severe health issues and lived for only a few days, the court heard.

Ms Small submitted the woman carried out the offence over a short period of time. “She was trying to get her head around it,” she said. Ms Small said the woman “didn’t react the way she should have and she deeply regrets it”.