Shop assistant prays for teenager who hit her with metal bar during robbery, court told 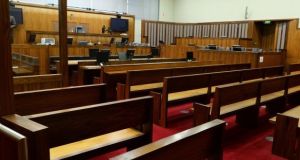 A shop assistant who was badly shaken when a teenager hit her with a metal bar while robbing the shop where she worked has been praying for the young man’s rehabilitation, a court has heard.

Barrister for Dylan Barry (19), Sinead Behan BL told Cork Circuit Criminal Court that the woman had conveyed a message to Barry’s family that she was praying for him after he hit her during an early morning robbery.

Det Garda Gary Purtill had told the court how Barry and a co-accused, Adrian Cummins (22) had broken into a house on Mourne Avenue in the Glen in Cork around 6.40am on February 28th last and stolen car keys.

They made off in the homeowner’s jeep. Cummins drove them first to Whitechurch and then to Grenagh where Barry went into the local Costcutters shop and joined a queue at the till to buy some confectionery.

However when the shop assistant opened the till, Barry produced a metal baton and struck the woman on the arm. He managed to grab € 45 in cash from the till only to be apprehended by the store manager and a customer.

While they were able to detain Barry until the gardaí arrived, Cummins took off in the stolen jeep, crashing it at Ballymorisheen in Grenagh. He then made his way to a farmer’s yard where he tried to hotwire three cars in a shed.

The farmer discovered Cummins trying to ram the shed door and he detained him until gardaí arrived. But officers had to wait for both defendants to sober up before they could question them as they were very intoxicated, the court heard.

Det Garda Purtill said the money stolen by Barry was recovered. Cummins caused €12,000 worth of damage to the stolen jeep which was a write off as well as over €2,000 in damage to the cars that he tried to hotwire.

Barry, from Kilnap Place, Farranree in Cork, had no previous convictions. Cummins, from Sunview Court, Sunvalley Drive, Fairhill in Cork, had a number of minor convictions for public order offences and road traffic matters.

Defence barristers, Sinead Behan BL and John Devlin BL asked for leniency for their clients. They pointed out that by pleading guilty to all offences, they had spared the state the expense of a trial and they should be given credit for that.

Cowen ‘surprised and disappointed’ after being sacked on the phone by Micheál Martin 07:46
Taoiseach dramatically sacks Barry Cowen as minister over drink-driving controversy 08:25
Covid-19: Overseas visitors are causing ‘stress and anxiety’ in some areas, TDs say 05:10
Three visitors investigated by Garda after refusing to fill in locator form 04:45
Irish peacekeeping veterans sue the State over ambush of convoy in Syria 03:01

1 Taoiseach dramatically sacks Barry Cowen as minister over drink-driving controversy
2 Miriam Lord: What the actual...? Martin blooded as Taoiseach after he wields axe on Cowen
3 Covid-19: Ireland likely faces ‘imminent second wave’ due to reopening, experts warn
4 Cowen ‘surprised and disappointed’ after being sacked on the phone by Micheál Martin
5 Chilean student ‘happy to be free’ after being detained for nearly two weeks in Mountjoy
Real news has value SUBSCRIBE