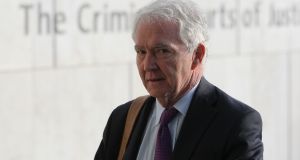 The Office of the Director of Corporate Enforcement (ODCE) changed the way it conducts criminal investigations after the 2015 trial of the former chairman of Anglo Irish Bank did not reach a conclusion.

A new trial of Seán FitzPatrick was told on Friday that gardaí seconded to the office now play a lead role in taking witness statements in criminal investigations.

Counsel for Mr FitzPatrick Bernard Condon SC has said witnesses due to give evidence in the case were “coached” by ODCE legal adviser Kevin O’Connell. Mr O’Connell has admitted that he was not trained for the role he had played.

The Circuit Criminal Court heard that the ODCE initiated training programmes for non-Garda staff in the wake of findings by the trial judge in the aborted 2015 trial that procedures used in the Anglo investigation were “sub-optimal”.

Mr FitzPatrick, of Whitshed Road, Greystones, Co Wicklow, has pleaded not guilty to 27 offences under the 1990 Companies Act. These include 22 charges of making a misleading, false or deceptive statement to auditors and five charges of furnishing false information in the years 2002-2007.

The court heard Mr O’Connell attended a meeting with Vincent Bergin from Anglo’s auditors, EY, without Garda colleagues, while conducting the investigation into Mr FitzPatrick. Mr O’Connell agreed the minutes indicated that he and A&L Goodbody partner Liam Kennedy, who was acting for EY, did most of the talking.

When Mr O’Connell said a lot of the evidence in the case was to be found in documents, Mr Condon asked if he was suggesting there were classes of cases where the coaching of witnesses was permissible. Mr O’Connell said he was not.

The court heard that in May 2010 ODCE legal adviser Adrian Brennan expressed concern about Mr O’Connell discussing legal interpretations of the issues in the case with EY and its lawyers. He was concerned witnesses might “shoehorn the facts” into the ODCE’s interpretation of the law.

Mr O’Connell said he now accepted Mr Brennan was correct and if Mr Brennan’s view had prevailed “things might have evolved in a very different manner”.

Mr O’Connell said he accepted that he did not seek to preclude EY auditors Vincent Bergin and Kieran Kelly from speaking to EY’s legal representatives, A&L Goodbody, before giving their statements. He said he did not believe they would have acceded to such a request.

“You never asked them,” Mr Condon said. Mr O’Connell agreed. He said he was accustomed to witnesses being accompanied by lawyers and did not anticipate the witnesses being willing to accede to such a request.

Mr Condon said both EY witnesses had sworn they would have given statements without their lawyers, if they had been asked.

Asked whether he did not believe them, Mr O’Connell said he accepted they had given that evidence on oath. He found it “very surprising” that this was now their sworn position.