Liam O’Connell who played role in rescue of 30 students was found with drugs worth €270,000 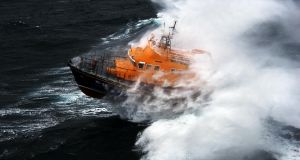 RNLI volunteer Liam O’Connell was involved in the rescue of 30 sailing students from the tall ship ‘Astrid’ when it hit rocks and sank off Kinsale in 2013. File photograph: RNLI/Nigel Millard/PA Wire

An RNLI volunteer honoured for his part in the rescue of 30 students when a sailing ship sank off the west Cork coast has been jailed for seven years after he admitted distributing and storing almost €270,000 worth of drugs in his home.

Liam O’Connell from Presentation Terrace, Kinsale, was sentenced to 10 years in jail with three years suspended after he pleaded guilty to possessing cannabis, cocaine and MDMA or ecstasy for sale or supply at his home on October 27th 2017.

Five years ago, O’Connell, who was a cox of the RNLI lifeboat Ms Sally Anne Baggy, was honoured with a West Cork Community Award for his role in helping rescue 30 sailing students from the tall ship Astrid when it hit rocks and sank off Kinsale in July 2013.

Gardaí found the bags contained large amounts of cocaine, cannabis and MDMA worth a combined total of €269,000.

Det Sgt O’Brien said that gardaí also found a ledger in the room which was being used as a tick list for dealers that O’Connell was supplying and he admitted previously collecting drugs in Dublin and bringing them to Kinsale where he stored them for distribution.

He was to be paid €6,700 for distributing and storing the seized drugs, said Det Sgt O’Brien, adding that O’Connell had no previous convictions. He had previously worked as a fisherman and on the buildings but was on social welfare at the time of the seizure.

Defence counsel, Siobhán Lankford SC said that her client was a valuable member of the volunteer RNLI crew in Kinsale and she presented a testimonial where one character witness said that O’Connell was the man to call if somebody found themselves in trouble off the Old Head of Kinsale at 4am.

She said he had assisted gardaí in their investigation and pleaded guilty at the first available opportunity, both of which she believed were sufficient grounds for Judge Seán Ó Donnabháin to use his discretion and not apply the mandatory 10-year sentence for all drugs seizures over €13,000.

But the judge said that O’Connell had exploited his status in the community where he was well respected because of his role with the RNLI to trade in drugs as a distributor and storeman where drug dealers would call to his house for their supplies.

He said it was significant that O’Connell was not a drug user or drug addict himself and was solely in the drugs business to make a profit and, in those circumstances, notwithstanding his guilty plea, co-operation and lack of previous convictions, he felt 10 years was the appropriate sentence.

However, he felt that O’Connell could contribute to society again, as being a volunteer member of the RNLI and venturing forth in all types of weather clearly required courage and it was a job not everyone could do so he suspended the final three years, leaving O’Connell with a seven-year jail term to serve.