Camden Exchange, where the RTÉ drama was filmed, struck deal with objectors 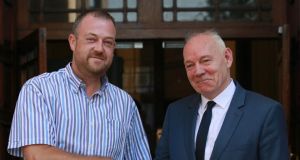 A real-life version of the restaurant in RTÉ’s Raw, based in the site used to film the drama’s restaurant scenes, is ready to open its doors, a court has been told.

Barrister Dorothy Collins told the Circuit Civil Court that the restaurant, named Camden Exchange, at 72/73 Camden Street, Dublin, had been developed in accordance with its planning permission.

Ms Collins told president of the Circuit Court Mr Justice Raymond Groarke, who granted the proposed restaurant a “declaratory licence” last July, that major renovations and refurbishment had been completed.

She said the premises had basement storage, a ground floor restaurant and a first floor kitchen, a cloakroom and lavatories. The owner, Stephen Johnson, was also applying for a drinks licence.

She said that Constance Cassidy SC, on behalf of objector Councillor Mannix Flynn, and Niki Andrews, counsel for objector Bernard Molloy from The Delux Hotel (Camden St) Ltd and Claytondale Ltd, consented to the application on foot of the agreed deal.

The court had previously heard that the agreement restricts Mr Johnson, who also owns The Bleeding Horse pub on Camden Street, from running the new premises in any way other than as a restaurant and café bar. The agreement said the premises was strictly not to be run or promoted as a public house.

Mr Johnson also agreed to maintain a full menu service and not to apply for music, singing or public dancing licences, or to ask the court for special exemption orders.

Mr Johnson gave an undertaking that, in the event of a future sale of the restaurant, the agreement with the objectors would become part of the contract for sale.

Mr Justice Groarke granted the certificate for a full seven-day publican’s on-licence and noted the undertaking from Mr Johnson in respect of the agreement entered into with the objectors.