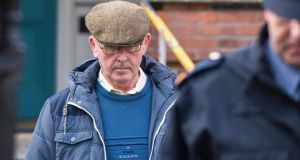 Fr Tadhg O’Dalaigh was sentenced for the sexual and indecent assault of two boys aged 14 and 16 at Coláiste An Chroí Naofa, Carrignavar, Co Cork

A retired priest has been jailed for three years for sexually and indecently assaulting two teenage boys while teaching at a Cork boarding school.

Fr Tadhg O’Dalaigh received a five year sentence with two years suspended for the sexual and indecent assault of two boys aged 14 and 16 in the 1970’s and early 1980’s.

Last month, Fr O’Dalaigh, a member of the Missionaries of the Sacred Heart was convicted of sexually assaulting a pupil at Coláiste An Chroí Naofa, Carrignavar, Co Cork, on an unknown date between March 1st and April 30th, 1979. The State alleged the incident took place in the school’s sick bay.

He was found unanimously guilty by a jury of 10 men and two women.

Fr O’Dalaigh (71) had previously pleaded guilty to five counts of indecent assault of another boy at the school between September 1st, 1982, and April 1st, 1983.

During his trial, O’Dalaigh, of Woodview Mount Merrion Avenue, Blackrock, Co Dublin, said that he had abused 10 boys while teaching at the boarding school between 1969 and 1974 and again between 1977 and 1985.

He said he had given the list of 10 names to his superiors in December 1995 after they confronted him in relation to rumours that he had abused boys at the school.

The judge said O’Dalaigh had to be kept under a strict regime for the rest of his life to ensure no other child was exposed to risk.