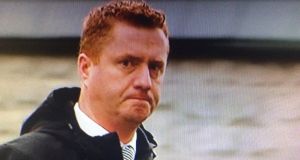 The court heard Ray McHugh bought the schoolgirl a charm bracelet for her 13th birthday with ‘love’ inscribed on one charm. Photograph: RTÉ

A 39-year-old Galway man has been given an eight-and-a-half year prison term with the final 18 months suspended for the oral rape, sexual exploitation and sexual assault of a schoolgirl.

The court heard his offending came to light when sexually explicit text messages he sent to the then 13-year-old girl four years ago were seen by her mother. The girl’s phone froze and her mother offered to have a look at it. She found some disturbing texts - the accused had been pestering the girl to give him oral sex - and contacted gardaí straight away.

The court was told McHugh had deleted explicit sexual texts he had sent to the child and instructed her to delete them once she had read them.

Gardaí had no difficulty retrieving the texts from McHugh’s phone and from the girl’s phone using digital forensics software.

McHugh had denied twenty sample charges involving the oral rape, sexual assault and sexual exploitation of the girl on dates between May 1st, 2014 and February 27th, 2015 during a two-week trial in December.

The jury found him guilty of fifteen charges including of orally raping the child on four separate dates between October and December 2015. They also found him guilty of four counts of sexually assaulting the girl and guilty of seven counts of sexually exploiting the girl by sending her text messages, inviting or inducing her to engage in sexual, indecent or obscene acts on various dates between October, 2014 and February, 2015.

McHugh was placed on the sex offender’s register and spent Christmas in prison awaiting sentence.

Passing sentence on Friday, Judge Rory McCabe said there had been an element of grooming involved and for a period of seven to eight months, McHugh, had every opportunity to stop, but he didn’t.

McHugh hung his head and started to cry when sentence was imposed.

The now 17-year-old girl was present in court with her mother for the sentence hearing. In her victim impact statement the girl said she was scared when her mother read the texts on her phone because McHugh had warned and threatened her not to tell anyone.

“Until someone else knew about it and I said it out loud, I didn’t know how wrong it was.

“I hate the way people talk about sexual assault as if they know what they’re talking about. They makes jokes about it. They don’t understand.

“He took so many pieces of me and he didn’t care.

“All through the trial, I was sick at the thought of being cross-examined. It brought it all back.

“After he was convicted, I thought all the anger and sadness would be gone but that didn’t happen,” the girl said in her statement.

She said she had stopped trusting all men and would only go to a female nurse or doctor now.

The trial heard McHugh had claimed in statements to gardaí that the girl was lying because he suffered from erectile dysfunction around the time she said he had abused her.

Medical records confirmed McHugh, who was newly married at the time, did suffer from the condition but had been prescribed medication to alleviate symptoms.

McHugh started to hug the girl and this progressed to kissing her on the lips. He began to grope her when he got her alone and this soon escalated to sexual assault and oral rape.

She told gardaí McHugh bought her a charm bracelet for her 13th birthday with ‘love’ inscribed on one charm. The abuse started after that, she said.

At one point, he told her his wife had found the receipt for the bracelet and they had a big row because she thought he was having an affair.

The girl said McHugh first forced her to perform oral sex on him during the Hallowe’en school holidays in 2014.

The sentence hearing heard McHugh came from a very respectable family and they, his wife and baby son, were victims too of McHugh’s crimes.