Mother claims she was pepper sprayed by gardaí, court hears 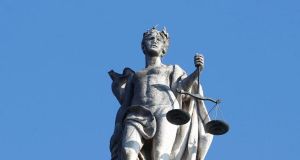 Mother Sharon Joyce has claimed in the Circuit Civil Court she had been assaulted by gardaí when they attempted to seize her car. The claims have been denied by the defendants. Photograph: Michaela Rehle / Reuters

A 32-year-old Dublin mother has claimed in the Circuit Civil Court she had been assaulted by gardaí when they attempted to seize her car.

Sharon Joyce, who is suing the Commissioner of An Garda Síochána and the Minister for Justice for damages, defamation and assault, claimed she had been pepper sprayed during the incident. The claims have been denied by the defendants.

Ms Joyce, of Deerpark Avenue, Tallaght, Dublin, told Judge James O’Donohue that on a Sunday morning in January last year she had been driving her brother, Christopher Joyce (17), to a football match when she was pulled over by the Garda Traffic Corps.

Barrister Conor Kearney, counsel for Ms Joyce, said that after conducting a vehicle registration search, Garda Dylan Brady and Garda Barry Cashman told her the car did not belong to her and that they were seizing it because the motor tax and NCT had expired for several months.

Ms Joyce told Mr Kearney she had tried to explain to them that she had recently bought the car from her brother, Raymond Joyce, and that it was still registered in his name but was in the process of being transferred.

She told Judge O’Donohue that she accepted the tax and NCT had been expired and the Gardaí had been entitled to seize her car. She said she had been waiting for the logbook to register the car at her own address.

Ms Joyce said she had been in her car pleading with the Gardaí not to seize it when Garda Cashman had reached into the car and had removed the key from the ignition.

The court heard that Ms Joyce had then called her brother’s football manager who later came to the scene and picked up the teenager.

Sharon Joyce denied she had been abusive. She said Garda Brady had threatened her to use his incapacity spray on her, and had later said “spray, spray, spray” before spraying the substance in her face.

She had then been dragged out of her car and handcuffed, before being put at the back of a Garda jeep which had arrived on scene.

Ms Joyce claimed she felt threatened while being brought to Rathfarnham Garda station by two male gardaí while she was temporarily blinded and had difficulty breathing.

She said that as she had no seatbelt on the Garda sitting beside her had stretched across her to fasten her seatbelt.

She told Mr Kearney she had needed to go to the A&E department of Tallaght hospital, Dublin, after she was released that day, as she had been suffering from panic attacks, hyper ventilation and an itchy rash.

Barrister John Brennan, counsel for the defendants, said his clients denied liability. He told the court Ms Joyce had been abusive and aggressive towards the two gardaí and she had used “choice” language.

Garda Brady said Ms Joyce had attempted to strike him while she was in her car, and had called them “fucking wankers and cunts,” shouting loudly as a passer-by walked nearby.