Couple, who wanted to create ‘better future’ for their children, given suspended sentences 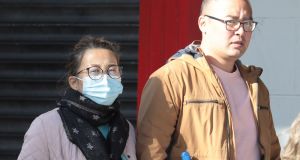 A Mongolian couple paid €19,000 to get a false naturalisation certificate to obtain an Irish passport so they could create “a better future” for themselves and their three sons, a court has heard.

Naranbat Ganbat (37) first met with “an intermediary” in order to organise the certificate to allow for the preparation for an Irish passport for his wife Altankhundaga Badrakh (37).

He initially paid €11,000 and later paid a further €7,000 once her passport was processed. Ganbat gave the intermediary a further €1,000 in recognition of getting the passport in August 2015.

Another Mongolian national Gantulga Turbayan (42) also received a two-year suspended sentence from Judge Codd after he admitted that he had paid €25,000 for the certificate.

Ganbat and Badrakh of The Courtyard, Hill Street, Dublin 1 pleaded guilty at Dublin Circuit Criminal Court to providing false documentation when applying for an Irish passport on a date unknown between July 23rd, 2015 and August 12th, 2015. The pleas of guilty were accepted by the State on the basis that the couple were reckless.

The court heard that the couple travelled to Ireland using doctored Czech passports and they found work here using the Personal Public Service (PPS) number of another Mongolian native who was leaving Ireland at the time.

Turbayan of St Ignatius Road, Drumcondra, Dublin 7, pleaded guilty to the same offence, again on the basis that he was reckless. The court heard he came to England under a false identity but that was not a matter before the court.

Garda Cian Steers told Diana Stuart BL, prosecuting, that the crimes came to light through a garda operation called Operation Porcelain in relation to the issuing of Irish passports to non-nationals on the back of false documentation.

John Noonan BL, defending Ganbat, said his client told gardaí­ that he had always hoped for his family to get naturalisation but he knew it would take a long time.

“Looking back now it is suspicious, yes but at the time I didn’t think about it,” he told gardaí­. When asked if he could, would he go back and change it, he replied “It would never happen”.

Aoife McMahon BL, defending Badrakh, said her client was at the lowest tier of the operation and told Judge Codd that the couple had used their entire savings to pay for the intermediary.

“She wanted to make a better future for herself and three young boys in Ireland and wanted them to go to college and get an education,” counsel said.

Judge Codd said the couple had acted entirely recklessly and that they must have been suspicious handing over the money for the documentation.

She accepted that Badrakh’s motivation was to obtain a better life for her children before she acknowledged that reports before the court show that her sons “seem to be doing very well”.

The judge acknowledged that the couple had sold an apartment in Mongolia to get the savings together to pay the intermediary. She said the fact that he decided to give the man an additional €1,000 as a gratuity shows that he valued what was being done for him.

Judge Codd sentenced Badrakh to two and half years in prison which she suspended in full on the condition that she keep the peace for that time.

She sentenced Ganbat to three years in prison which she suspended in full on condition that he keep the peace and be of good behaviour.

Judge Codd said she didn’t think anyone “could be so naive as to believe it was proper procedure” when Turbayan agreed to hand over the money to the intermediary for the certificate. She said she didn’t accept he was a victim in the case and said he was fully reckless.

“It is on his own head that he is now at a loss of the money,” Judge Codd said.

She took into account that he was at a lower level in the operation and that he had no previous convictions. She suspended a two year sentence on condition that he be of good behaviour for two years.

Gda Steers said he was briefed in March 2019 that documentation reviewed by gardaí­ gave sufficient grounds for Turbayan’s arrest in August 2019. He was interviewed and admitted that he had been informed by a friend that it was possible to get an Irish passport.

Turbayan said he then contacted an intermediary who told him he could get him an Irish passport that the process was “100 per cent legal”. He was told that he had to pay a first instalment of €10,000 and a further €15,000 once he was provided with the naturalisation certificate.

He met the man in a car outside his home and paid over the €10,000. He got the naturalisation certificate six weeks later when he met the man at the front of the General Post Office in Dublin city centre.

Turbayan said a month later he was asked to come into the passport office because there was an issue with his application.

“This is when I found out everything was all wrong. There were other Mongolians with the same issue, I was shocked,” Turbayan told gardaí­. He said he later got €4,300 back from the intermediary.

Gda Steers said Turbayan has no previous convictions and has not come to garda attention since his arrest. He lives with his partner in Ireland but is unable to work because of his current status.

The court heard that Badrakh’s passport was issued in August 2015 before Operation Porcelain was launched. The false naturalisation certificate was identified by staff at the Department of Justice who were carrying out internal integrity checks.

Badhrakh surrendered her passport after an investigation began into the legitimacy of it in July 2017.